Officer of the Year | Edina, MN
Skip to Main Content

Officer of the Year

Each year, the Crime Prevention Fund recognizes an Edina Police Officer who has gone above and beyond the call of duty. Community members and City staff are encouraged to submit nominations for Edina officers who have modeled exemplary service and leadership through innovation and public relations. Individuals eligible for nomination must be current Police Officers for the Edina Police Department. 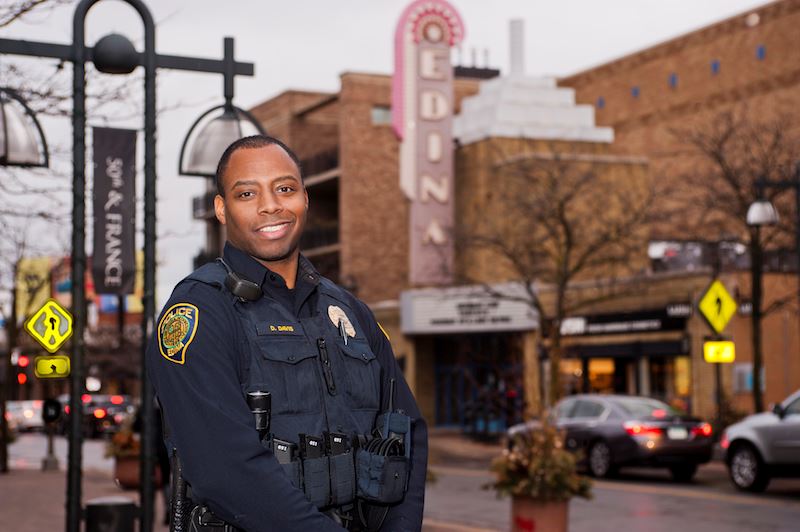 Officer Darren Davis was named the 2019 Mike Siitari Officer of the Year by the Edina Crime Prevention Fund. Edina Police Chief Dave Nelson presented Davis with the award at a small gathering outside the Edina Police Department Wednesday, Aug. 5.

Davis, who joined the Edina Police Department in 2016, has policing in his blood. His father, Darren Davis, Sr., retired as Police Commander at Northwestern University in Evanston, Illinois. Growing up in a law enforcement family, Davis knew from a young age he wanted a similar career.

He graduated from Winona State University in Winona, Minnesota, with a bachelor’s degree in criminal justice. Davis began his work in the field at a small nonprofit called the Family and Children’s Center in Winona. There, he ended up running the Youth Night Campus, working with kids on the cusp of going into juvenile detention or coming out of placement. Davis then worked as a Correctional Officer and then Probation Officer with Dodge-Fillmore-Olmsted County Community Corrections.

“What I was doing was great and I was making an impact, but I wanted to be that initial contact to be able to stop something before it got worse,” said Davis.

After his first child was born in 2016, Davis and his wife desired to move closer to family in the Twin Cities. Davis applied to become an Officer with the Edina Police Department and before he knew it, he was hired.

Since beginning with the department, Davis has joined the SWAT team, become a Neighborhood Engagement Officer and drone operator. He also sits on the City’s Race & Equity Advancement Team.

“Darren is a team player and selfless, always going out of his way to help his shift partners and the community. Darren takes the extra time on calls to make sure the residents of Edina are getting the highest service possible,” said Sgt. Dave Boosalis, who leads the night shift of which Davis is a part.

The Mike Siitari Officer of the Year award is given annually to an officer of the Edina Police Department who has modeled exemplary service and leadership through innovation and public relations. Past President of the Edina Crime Prevention Fund Jon Barnett said Davis was selected for the recognition because of his strong community ties.

“It was clear in the nomination letter that Darren is extremely dedicated to his job, his department and the residents of Edina,” said Barnett.

The nomination came from a resident who said, “From the very first time I met Officer Davis, I could tell he truly cared about my safety and the safety of the entire community of Edina. … Officer Davis took immediate action on his day off. This was way above and beyond the call of duty.”

“He sincerely cares about connecting with the community, and it didn’t take long after hiring him before I started getting thank-you letters for his outstanding
service. He’s a great asset to our department, the SWAT team and community,” said Nelson.

The Crime Prevention Fund has recognized at least one officer a year since 2011. The Officer of the Year Award is named after Mike Siitari, who served as Police Chief from 1999 to 2009 during his 31-year tenure with the Edina Police Department. Winners are selected by members of the Edina Crime Prevention Fund.

Davis said he is humbled to receive the award and mentioned that his father was proud.

“He is extremely proud and happy for me,” said Davis. “My father received a similar award at the same time in his career, and I think that is pretty cool.”

The Edina Crime Fund has been a community partner for over 40 years, helping fund Police Department services and recognize exceptional officers. The Officer of the Year Award is named after Mike Siitari, who served as Police Chief from 1999 to 2009 during his 31-year tenure with the Edina Police Department. Winners are selected by members of the Edina Crime Prevention Fund. Past recipients of the award include Officers Joel Moore, Dave Lindman, Jake Heckert, Mike Seeger, Det. Mike Lutz, Det. Erik Amundson, Sgt. Brian Hubbard and Sgt. Kevin Rofidal.

To nominate a candidate, submit the name of the officer and a few sentences describing the nominee’s achievements. Nominations for the award can be sent to Julie Norgren or: