The 2017 Edina Heritage Award was presented to Nancy Johnson and Paul Anton for their home at 5133 Mirror Lakes Drive. Built in 1951, on a 2/3 of an acre, heavily wooded site in the Highlands Neighborhood, at the time, the home was at the end of the road with no other homes nearby. 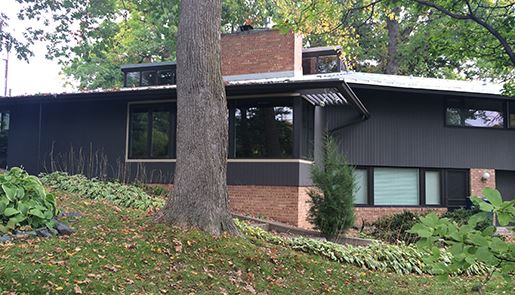 Cerny’s design included three segments that wrapped around the brow of a heavily wooded hill. The rear wall facing the woods is almost completely windowed. Unique elements to the home that exist today include:

Ms. Johnson and Mr. Anton purchased the home in 2014, and spent over five months planning for both interior and exterior improvements to the home that would be sensitive to Robert Cerny’s original design.

Some of the numerous projects they undertook included:

In this day and age when people are quick to purchase older homes and tear them down to build new, the Heritage Preservation Commission commended Nancy Johnson and Paul Anton for the interest they took to research and preserve Robert Cerny’s design style - creating a home that stays true to Mr. Cerny’s vision, while improving the home’s contemporary livability.
Activity Registration
Better Together Edina
City Extra Email
Jobs
Learn About Projects
Permits & Applications
Public Hearing Comments
Utility Billing
/QuickLinks.aspx
[]