Built in 1934, the sign was demolished by a tornado in 1980 and rebuilt to the original specifications. In 2003, the building owner extensively overhauled the sign – researching the color palate of the art deco era.

The Edina Theatre is an Art Deco style motion picture theater located at 3911 West 50th Street. Built in 1934, the original design by Liebenberg and Kaplan featured a brick-faced, ziggurat-stepped façade with a tower, metal canopy and lighted sign. 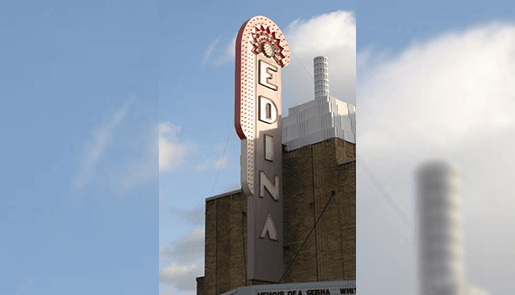 Since it opened on August 31, 1934, the theatre has undergone extensive alterations, including replacement of the original canopy and marquee and modifications to the entrance, lobby, lounge, box office and retail shop spaces. All but 30 feet of the auditorium was reconstructed in 1984. Nevertheless, the building’s historic plan and form remain largely intact.

Although it is one of the last remaining prewar movie houses in the Twin Cities, the Edina Theatre building has lost much of its historic significance as a result of alterations, which have removed or obscured many of its Art Deco details.

In 2002, the Edina Heritage Preservation Board found that the reconstructed theater sign was the property’s most historically significant architectural feature and determined it alone was eligible for Edina Heritage Landmark designation as an historic object.

The City’s preservation code allows for the designation of historic objects as landmarks in cases where the historic resource is a significant example of public art related to a specific location. In this case, although the physical relationship between the sign and the theater building is important in defining its historic identity, it is understood that the heritage value of the sign is not necessarily dependent upon preservation of the theater façade. The plan of treatment supporting the landmark designation provides for guidance in restoration and recognizes that if the sign must give way to new development, it may be relocated to a new site with compatible surroundings where it can be preserved and rehabilitated.
Activity Registration
Better Together Edina
COVID-19 Information
Jobs
Learn About Projects
Permits & Applications
Referendum Information
Utility Billing
/QuickLinks.aspx
[]