The City of Edina is working to hold accountable those responsible for contamination of local groundwater. Drinking water is certified safe because it is treated, but the City wants the original polluters identified and held accountable for cleanup expenses.

The Minnesota Pollution Control Agency (MPCA) has mandates to go after the sources of contamination and make them pay for cleanup or compensate for treatment.

St. Louis Park has one such contaminated site, and the plume or area of contaminants from it stretches into part of Edina through an aquifer more than 300 feet below ground. Since trace contamination first appeared in an Edina well in 2000, the City has taken steps, including installation of a sophisticated treatment system, to remove the chemical contamination. The treatment keeps the water safe to drink and use, exceeding all federal or state standards. Edina treats its entire water supply and filters most wells to ensure any contaminants are removed. Treatment can be costly, but is vital to ensure the safety and quality of drinking water.

History of Impact on Edina

In the early 2000s, Well No. 7, a well in Sherwood Park in Edina drawing from the Prairie du Chien/Jordan Aquifer, tested slightly above the Maximum Contaminant Level set by the Environmental Protection Agency for vinyl chloride, a colorless organic gas. At that time, Well No. 7 was used only in the summer.

Well No. 7 was shut down in early October 2003 and was not turned on again until after a high-capacity treatment plant was built at the ground-floor level of the Jerry’s Foods parking ramp, 5120 Brookside Ave., in 2012. The plant is equipped with an aeration system specially designed to filter out vinyl chloride. The treatment plant is Water Treatment Facility No. 6 and four of Edina’s drinking water wells are connected to it. The water coming out of this plant is safe, surpassing both state and federal requirements for safety and quality.

Typically, MPCA staff try to find the sources of contaminant releases. The source of the vinyl chloride was determined to be in St. Louis Park and was coming into Edina in the Prairie du Chien/Jordan Aquifer, very deep below the surface.

MPCA staff collected and analyzed samples from monitoring wells, industrial wells, irrigation wells and other municipal wells located in the western Twin Cities metro area. The results showed a “volatile organic compound (VOC) trail” that allowed the MPCA to trace the contamination back 2.3 miles, to the Highway 7 and Wooddale Avenue area in St. Louis Park. The exact source has not yet been identified.

MPCA has dubbed the 324- to 545-foot deep groundwater plume the “Highway 100 and County Road 3 Groundwater Plume.” Like drinking water, the air and soil in the area of the solvent plume is safe.

A more concerning “contaminated shallow groundwater plume” is less than 120 feet deep in St. Louis Park and has little to no chance of working its way to Edina.

MPCA has narrowed the list of contaminators to five properties. (Businesses now at these properties may not be responsible if the contamination occurred when the properties were owned by someone else.) The MPCA has exhausted funding in identifying the exact source of contamination and is looking for help from the federal government.

EPA recently published its Community Involvement Plan (PDF) after agency representatives listened to Edina and St. Louis Park community members and local officials about the Highway 100 and County Road 3 Groundwater Plume site. The Agency collected information on the community’s engagement and information preferences as well as questions and concerns about the site. A Community Involvement Plan (PDF) was drafted and released in December 2022. A community advisory group for the Superfund site will soon be formed. 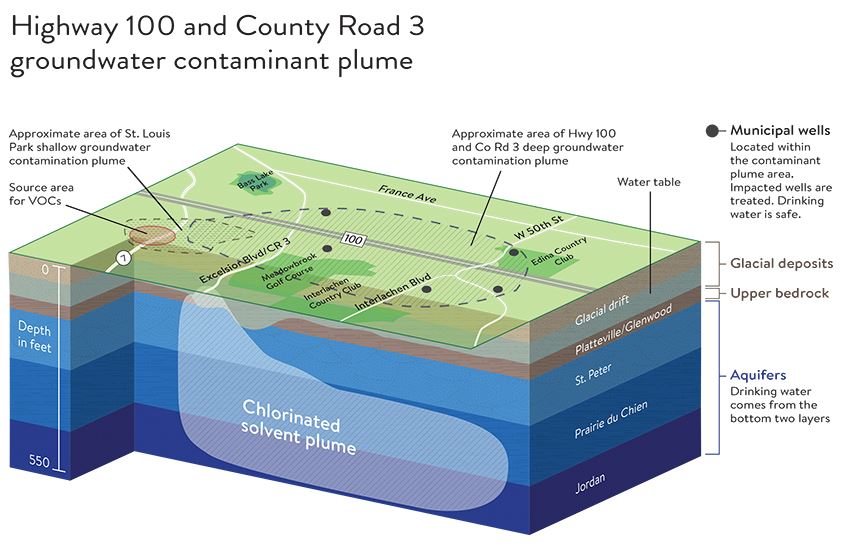