January 2020 – International travel is often touted as an eye-opening and formative experience for American youth. Hometown Hero Olivia Pierce not only agrees with that conventional wisdom, but can back it up with her own compelling personal story.

In March 2018, during her sophomore year at Edina High School, Pierce and about 20 peers visited the island nation of Haiti for a church-organized tour and mission trip. Over this whirlwind 10-day trip in the mountainous northern commune of Pignon, the group packed in a number of meaningful experiences – almost too many to enumerate.

Highlights for Pierce included an orphanage visit and volunteer shifts at two pro bono medical clinics. “While I was there, I witnessed the stark healthcare disparities around the world,” Pierce recalled. “I also realized how fulfilling it is for me to spend time with children.” 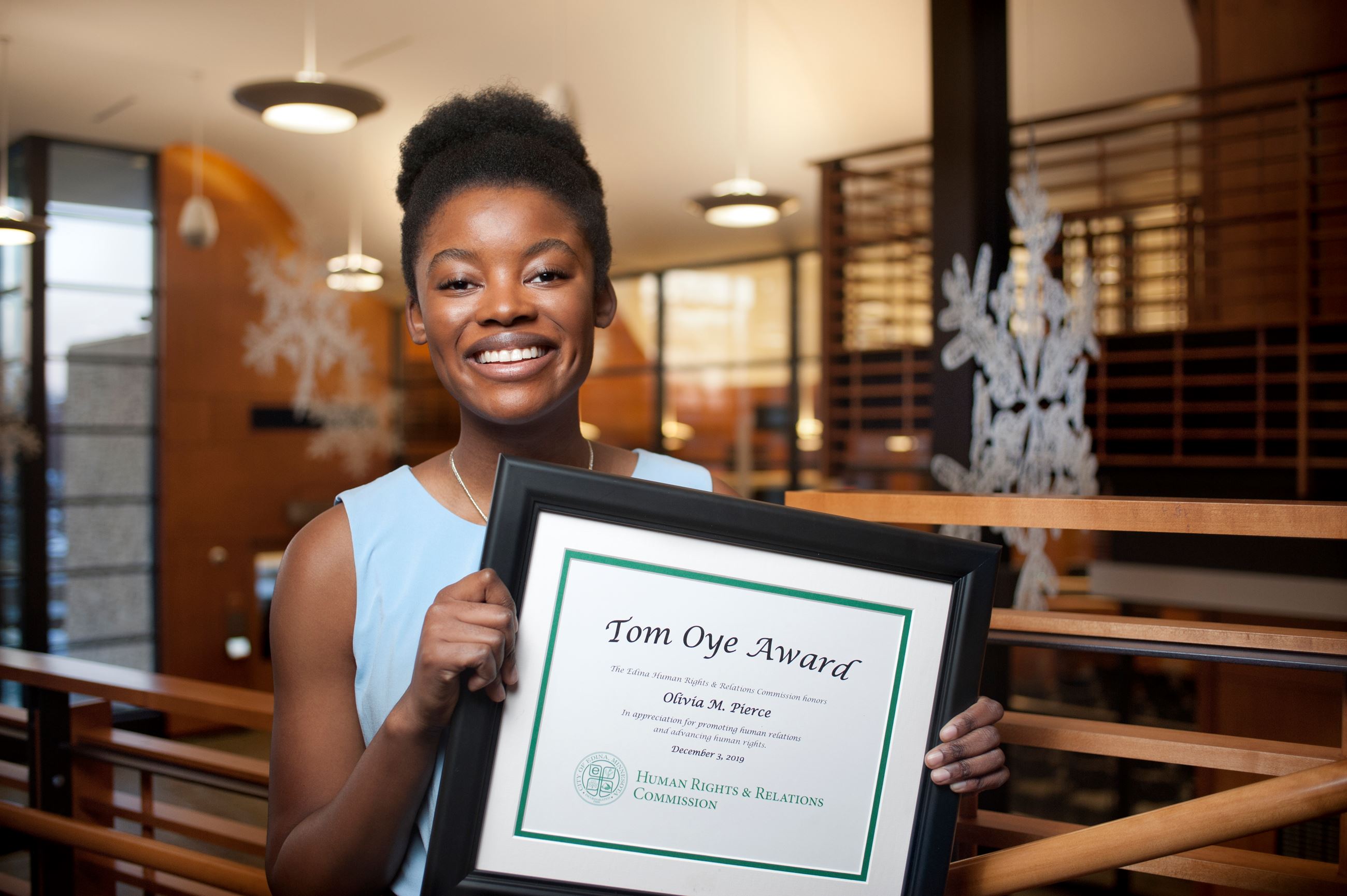 Haiti stoked a professional interest in the healthcare field – one that she had been nurturing since around the age of 11, says her mother Spiwe Jefferson. “Olivia’s sister was hospitalized for asthma many times when she was younger … Rather than viewing that situation with helplessness, Olivia was moved to aim for a career as a pediatrician.”

She has already made impressive strides in that direction. Last summer, the National Student Leadership Conference selected Pierce to take part in a highly selective medical leadership camp at Harvard Medical School.

Pierce’s spring break in Pignon left a lasting mark on her in other, more subtle ways as well. It forced her to reappraise her religion – a faith built on inclusive principles – through the lens of race and bias.

“In order to share the story of the Gospel with the [Creole-speaking] Haitians, we used a wordless picture book so that we could overcome the language barrier,” she explained. While sharing that book, it dawned on Pierce that the Middle Eastern characters were all depicted as white ... a fact not lost on the predominantly black Haitian audience.

“When one man asked us why Jesus was depicted as white, we didn’t have an answer,” she said. “That experience made me curious as to why Christianity is considered the white man’s religion.”

Pierce embarked on a deeper look into the visual representation of minorities (or conspicuous lack thereof) in Christian texts. This personal mission culminated in an invitation to share her findings about race and unconscious biases in October 2018, as part of the inaugural TEDx Edina forum.

Only three higher schoolers made the cut; a feat on the face of it, but doubly so given that the TEDx organizers winnowed down the 14 featured talks from an original pool of about 100 candidates.

Pierce’s 12-minute presentation, titled Power of a Portrait, used historical depictions of Bible characters and the modern missionary field as an entry point into understanding unconscious biases. While focused on Christianity, Pierce contended that her thesis is applicable to just about every aspect of society. “If you’re working to encourage an inclusive atmosphere in other areas of life, then my speech applies to you.”

Pierce’s presentation has garnered 14,000 views on the official TED website.

In recognition of her convictions and accomplishments to date, the Edina Human Rights & Relations Commission named Pierce a 2019 recipient of their Tom Oye Award. “I am honored … to be welcomed into a legacy of such amazing leaders,” Pierce said.