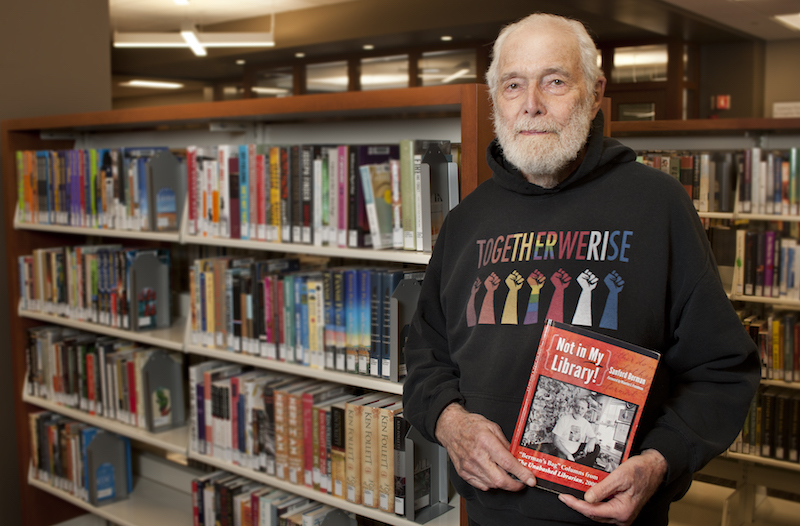 February 2020 — Sanford “Sandy” Berman is the latest recipient of the Tom Oye Award, the highest honor given by the Edina Human Rights & Relations Commission. While he is tremendously proud of the recognition, he can’t help but call out a bittersweet irony in linking his legacy to Oye’s.

“Tom Oye was second generation Japanese American – a Nisei soldier who joined the Army during World War II,” Berman explained. He fought bravely overseas, despite his country’s cold-hearted treatment of the Japanese American community on the home front. “From 1942 to 1945, our own government confined more than 120,000 innocent people to concentration camps.”

Fortunately, Oye lived long enough to see the federal government issue a formal apology and offer belated reparations for this injustice. Regrettably, however, that change in attitude is still not reflected in the official categorization scheme of the national Library of Congress (LOC). This greatly troubles Berman, a career librarian.

The difference is not trivial. The Library of Congress defines and controls the authoritative list of subject headings used by the majority of public, university and K-12 school libraries in the United States. (The Dewey Decimal classification system, which is employed by the rest, is equally rigid and problematic, notes Berman.)

“I hate to think that, in a city with a human rights body and an award named for someone like Tom Oye, a whitewashed [phrase like] evacuation and relocation is still the term of record… for study of that topic,” Berman said.

“Another very timely example is immigration,” he continued. “‘Undocumented immigrant’ is a non-pejorative phrase you see a lot now. However, if you search ‘undocumented immigrant’ in a subject search at your local library … you’ll likely turn up nothing.” This is because the subject heading sanctioned by the Library of Congress is instead the outmoded and disfavored phrase “illegal aliens.”

Berman, who served as head cataloger for the Hennepin County Library (HCLIB) system from 1973 to 1999, can point to scores of additional examples. He also understands better than anyone that modernizing such subject headings is not as easy as it looks. Over a decades-long career in librarianship, he championed a number of updates. Many died on the vine.

“My field often suffers from what I call pathological self-paralysis. … The powers that be at the Library of Congress are reluctant to effect change,” and local libraries rarely deviate from the Library of Congress or Dewey Decimal standard. Berman estimates that of the more than 9,000 library systems in the United States, only around 35 have shown the progressive grit to adopt or modernize terms on the local level.

Granted, Berman can point to plenty of successes to illustrate that forward progress can be made. For example, the Library of Congress has removed pejorative terms like “yellow peril” and "Jewish question,” reclassified “Gypsies” to the ethnically correct “Roma,” and begun to reconsider its treatment of LGBT themes.

Nevertheless, the volume of work remaining to be done keeps Berman from well and truly retiring, even 20 years removed from his post at HCLIB. He writes a quarterly column for the industry journal Unabashed Librarian and penned a 2013 book titled Not in My Library.

“What’s most frustrating might be the omissions you see today,” Berman noted. Common themes – and commonplace terms – like affordable housing, mass incarceration, white privilege, and white supremacy are nowhere to be found.

“I strongly [encourage] librarians to keep this push alive, especially through national bodies like the American Library Association.” However, you do not need to be a practitioner to make a difference. “If you are a patron, talk to your local library’s staff and let them know what you find problematic. You can also write directly to the Library of Congress’s Policy and Standards Division.”