More information about the organics recycling program, including FAQs, is at EdinaMN.gov/Organics. 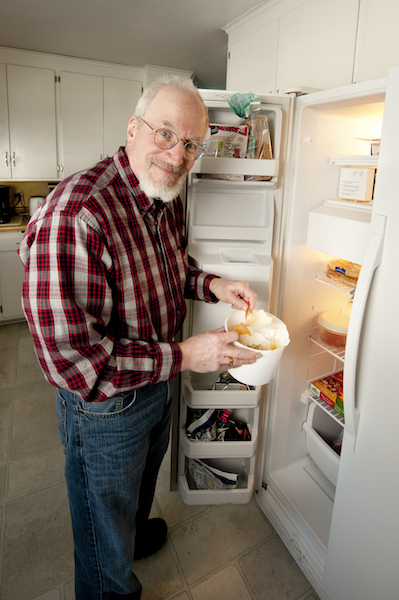 March 2020 — In 2017 alone, Americans generated 267.8 million tons of solid waste – just over 4.5 pounds per person each day. A staggering 139.6 million tons of that waste ended up in landfills, according to the U.S. Environmental Protection Agency (EPA). Overreliance on landfills, in turn, presents a bevy of environmental issues – from chemical and toxin risks to high greenhouse gas emissions.

With numbers on this scale, it can be tempting to conclude that any one family’s efforts toward a more sustainable lifestyle count for very little in the grand scheme. However, that’s just not the case, notes longtime Grandview Neighborhood resident Bruce Kieffer. “Devote time to sorting and composting. Proper disposal of your organics garbage adds up fast.”

Indeed, the EPA estimates that biodegradable trash like food scraps account for a full 25 percent of the tonnage added to U.S. landfills each year. Moreover, nearly 75 percent of the food scraps and leftovers that could be composted are not. “While it’s not the only thing we can do to minimize use of those dumps, it’s clearly a good place to start,” Bruce reasoned.

“Here in Edina, getting started with composting is easier than you might think,” he continued. Contrary to the perceptions of some, it does not require a bin or pit in your own yard. “Backyard composting is fine for certain folks, but I’m among the many who just don’t want to deal with that. Realistically, you have to balance ease and cost against benefit.”

Instead, Bruce and his wife, Marnee, contract with Vierkant Disposal for curbside pickup of their organics. “We’ve been working with Vierkant for over a year now, and like I said, after a point, it’s become a nice and thoughtless process for us – though one that I know is doing something to curb our impact on the climate.”

“In our case, I’ve repurposed a little ice bucket – originally from a motel – for short-term storage of our kitchen waste and Kleenex,” Bruce explained. “This is usually in our freezer to prevent odors in the kitchen, though actually much of that material really doesn’t smell in the first place. … As needed, I then dump the contents of the ice bucket into a larger bin [in our] garage.”

Bruce is curious, but optimistic, to see what happens after the City of Edina introduces citywide organics recycling later this year. “Some may be adverse at first, but that should change when people realize that the volume they produce [warrants] the effort.”

Put another way, organics composting encompasses far more than coffee grounds, bread crusts, and other “soft” materials that residents readily think of as compostable. Degradable products like napkins, paper towels and Q-Tips make up a fair share of the EPA’s estimated 4.5 pounds per person figure. Pizza boxes and other soiled takeout containers offer another strong example.

“It will take time, take education, but we’ll hopefully get to a point where it’s as normal as the composting of yard wastes,” Bruce said.

That is a promising point of comparison. In 2017, Americans composted nearly 24.5 million tons of yard debris. While an impressive enough number on the face of it, that statistic represents a five-fold increase in yard waste reclamation from 1990.

While only about 2.6 million tons of food waste was gathered that same year, consider where we could be in 30 years!