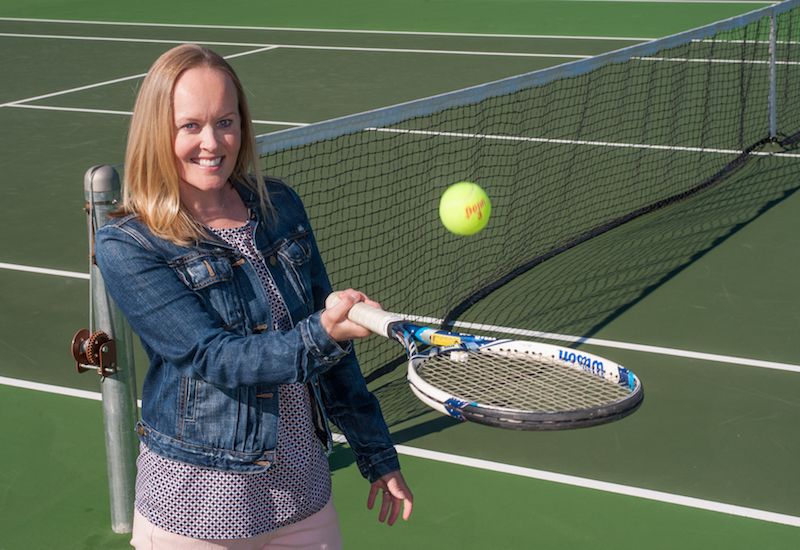 April 2020 – Edina High School claims more state-level athletic championships than any other school in Minnesota. The running tally currently stands at 187. Thousands of talented student athletes – spanning more than a dozen sports and nearly three quarters of a century – deserve some share of the credit for this record. However, even in a community with a sports tradition as rich as Edina’s, a few names are worthy of special mention. Jaime Gaard Chapman definitely falls in that camp.

A graduate of the EHS class of 2003, Gaard Chapman proved a tour de force across two different sports: tennis and basketball.

Gaard Chapman represented Edina on championship-winning tennis teams each year of her high school career, and also won the State Doubles Championship in 2001. After graduating, she played NCAA Division III tennis at Gustavus Adolphus College. In an echo of her Hornets career, the Golden Gusties reached the Elite 8 every year Gaard Chapman attended school in St. Peter, Minnesota. She garnered All-American honors as the 2006 ITA Regional Singles Champion.

While her tennis bona fides alone would likely have secured Gaard Chapman a spot in the Edina Athletics Hall of Fame, her basketball career certainly clinched it. She played on three consecutive Section championship basketball rosters, including on a team that placed in the state’s Top 5 overall during the 2000 season. In her senior year, Gaard Chapman won the Edina Basketball Exceptional Leader Award – one of several impressive honors she garnered while at Edina High School.

High on that list, Gaard Chapman also earned the coveted Athena Award – bestowed on a select few female athletes each year in recognition of outstanding achievements in sports and academics.

As the 2014 Hall of Fame inductee will be the first to tell you, there is more than an incidental link between stellar academics and participation in high school sports. Numerous studies show that the dedication and interpersonal skills honed in competitive play pay dividends in a student’s scholastic pursuits, as well.

Gaard Chapman parlayed her personal experiences – and a master’s degree in Counseling Psychology and Positive Coaching from the University of Missouri – into a unique athlete development enterprise called Gaard Performance Academy.

“Our mission is to authentically help student-athletes become the best they are capable of, in all areas of their lives,” she explained.

“I have observed that students will often invest in sport-specific training from one coach and academic tutoring from another,” Gaard Chapman continued. “But do these coaches ever communicate to one another about the student’s strengths and barriers? Do they share similar language when it comes to helping set performance goals? I felt [inspired to] create a company that bridges communication between coaches, and offers services that meet the needs of the total student-athlete, all under the umbrella of one trusted company.”

Gaard Performance Academy’s dynamic service portfolio, which runs the gamut from one-on-one agility training to college application assistance, is only one way in which Gaard Chapman shapes and inspires young athletes.

Between 2007 and 2019, Gaard Chapman also did double duty as an assistant coach for the varsity girls’ basketball team at her own alma mater.

“When the opportunity to return [to Edina] presented itself, it was really a dream opportunity to bring my passion and talents to a program that had created such positive experiences for me,” Gaard Chapman said.

It’s a dream she’s unlikely to wake up from any time soon. Over the last year, long-time varsity tennis coach Steve Paulsen and basketball coach Matt Nilsen both announced their retirements. In each case, their shared protegee seemed the perfect pick to fill the big shoes left behind.