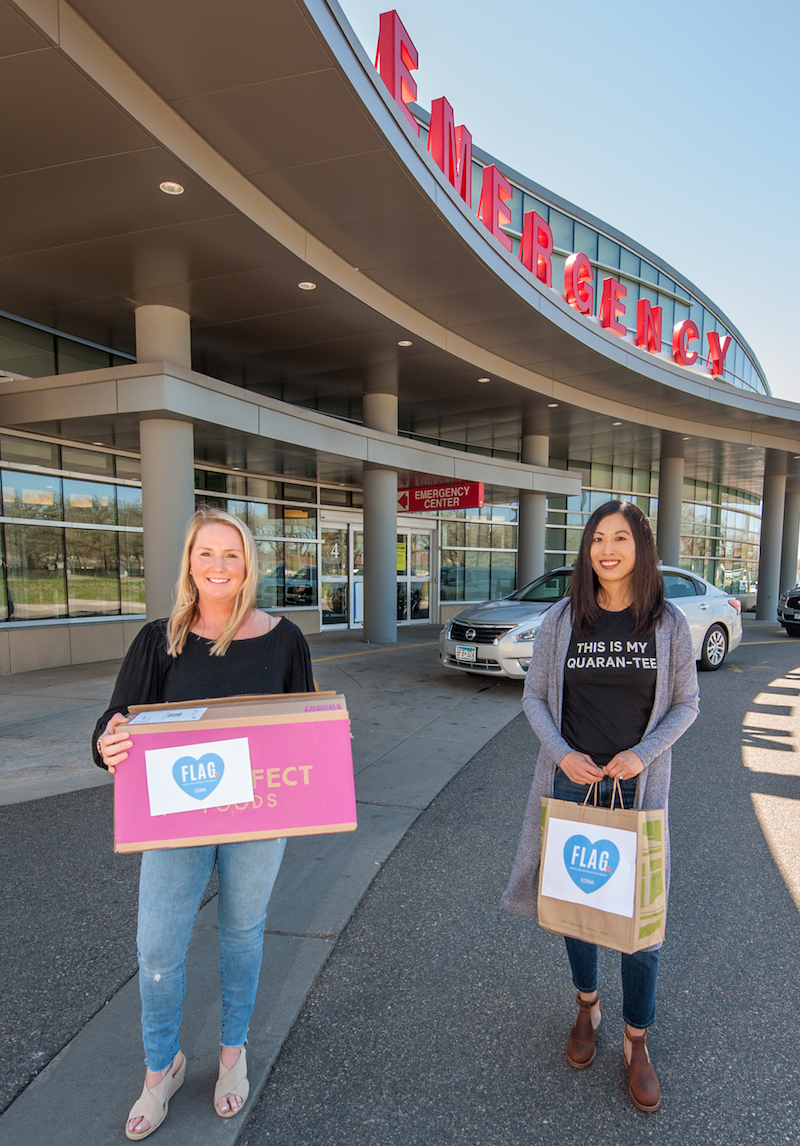 Rarely a day goes by when Edina residents Paige Kiss and Karen Liu are not in touch – via text, through phone calls and over social media. While normal enough behavior among friends, the pair’s relationship has a twist: less than two months ago, Kiss and Liu were strangers to each other.

They met through FLAG of Edina, a grassroots initiative started by Kiss in late March in response to the coronavirus pandemic.

FLAG stands for Front Line Appreciation Group. Its mission is two-fold: to show support for the medical workers at the vanguard of the public health crisis and bolster the community’s restaurants through a period of ebbing business.

Thanks to a growing roster of donors and volunteers, FLAG is able to deliver dozens of meals to area hospitals and clinics each day. Kiss calls it a small but tangible way of expressing a gratitude the whole community is feeling.

“Many of us know a nurse, doctor or other healthcare worker who is likely facing some challenging days both at work and at home right now,” she said.

“FLAG came out of a conversation I had with family in New Jersey early [in March],” she continued. “Similar initiatives were ramping up in their own town, and this concept struck me as something the Edina community would be extremely receptive to.”

Her prediction held true. Kiss floated the idea in an online mom’s group. Among other early supporters, Liu immediately saw the potential of the project and stepped up in a big way to help coordinate partnerships and deliveries.

“Our initial steps were to get a Facebook group and Go Fund Me page going,” Liu said.

Kiss and Liu also had to develop relationships with restauranteurs and hospital management alike – and all with very little lead time.

Eateries participating in FLAG run the gamut from 50th & France mainstays like Agra Culture Kitchen, to bakeries like Patisserie Margo and Patrick’s Bakery & Café. The pair have also expanded their reach to restaurants in Minnetonka and Saint Louis Park.

“While we are targeting healthcare workers in the ICUs and ERs – because they are most affected by COVID-19 – we also know that healthcare workers of every kind are at increased risk,” Liu explained. They try to make their donor dollars stretch accordingly.

Between March 26 (when Kiss posted her first inquiries online) and April 24, the program routed an impressive 550 meals and snack packs to these essential workers. That represents a $3,000 investment back into our local restaurant economy – a true win-win.

Kiss and Liu have high hopes for FLAG of Edina’s future. On April 22, a steady stream of donations allowed them to fill their largest single-destination order to date: 80 dinners for staff at M Health Fairview Southdale. Other deliveries on this scale seem likely in the future – “especially since we anticipate hospitals will get a lot busier in the next few weeks,” Liu said.

Moreover, Kiss and Liu’s positive example is spawning other campaigns in this same spirit.

“After one of our first deliveries, the owner of The Block in Saint Louis Park told us how fulfilling it was to see the smiles and appreciation,” Liu shared. “It led him to start his own fundraising initiative. That restaurant group is now aiming to donate 10,000 meals to local hospitals. That’s pretty amazing!”

Kiss invites residents to learn more about FLAG of Edina on the campaign’s Go Fund Me and Facebook pages.

“We will continue to coordinate meals as long as we have the funds – even after the stay at home orders are lifted. There is no limit to the appreciation we have for the healthcare workers who are so selflessly stepping up right now.”