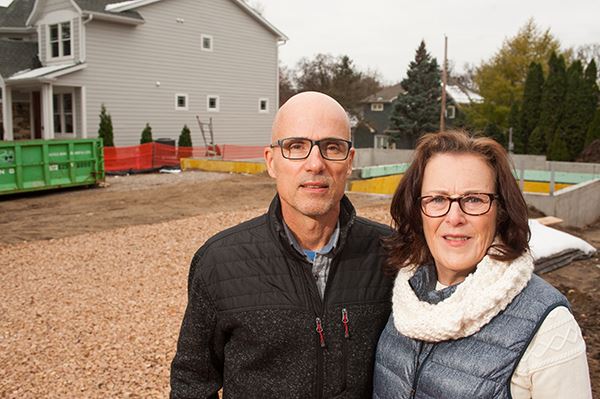 October 2020 — Dean Bachmeier and Carol Greenland called Edina home for nearly two decades, pursuing fruitful careers and raising a daughter here. As empty nesters on the cusp of retirement, the couple decided to relocate to a Minneapolis condo near Bde Maka Ska. That was four years ago.

“We ultimately decided we really liked and missed single-family living, and so started looking around Edina and southwest Minneapolis for a new place,” Bachmeier explained. Specifically, “we were searching for a main floor living situation, a retirement home where we wouldn’t need to worry about stairs and such as we aged.”

For-sale properties fitting the profile proved hard to come by. Despite enlisting the help of an experienced real estate agent, Bachmeier and Greenland made little headway in their target neighborhoods. “We then began conversations with the Realtor about maybe buying, demolishing and rebuilding.”

They eventually found and closed on a 1940s home east of Arden Park with that game plan in mind.

In lieu of a standard demolition – which routes tons of timber, insulation, glass and other construction materials to area landfills – Bachmeier encouraged their builder to look into a more meticulous deconstruction from Better Futures Minnesota.

Better Futures Minnesota is a Twin Cities-based nonprofit that prioritizes the salvage and reuse of homebuilding materials. In 2016 alone, Better Futures crews saved more than 2,000 tons of waste from areas landfills (and prevented hundreds of tons in harmful greenhouse gas emissions, to boot). Many of the reclaimed materials are routed to the operation’s mammoth, and aptly named, ReUse Warehouse in South Minneapolis.

Bachmeier learned of Better Futures through Westminster Presbyterian Church, a downtown congregation where Bachmeier and Greenland have been parishioners for more than two decades. In 2016-2018, the Nicollet Avenue landmark expanded its campus with a 40,000-square-foot addition. This project required the removal of an eight-story office building on Marquette Avenue – a tall order entrusted in part to Better Futures.

That positive experience stuck with Bachmeier, and not just because of the environmental aspect of Better Future’s mission.

“They are actually a social enterprise that does important work reintroducing former felons into society,” he explained. Among other services, Better Futures offers its workers valuable professional skill development – including a special and in-demand deconstruction certification.

When submitting a bid for their Arden Park property, Better Futures alerted Bachmeier and Greenland to a relatively new deconstruction grant available to Hennepin County homeowners considering a full or partial demolition. Up to $5,000 is available to eligible candidates willing to take the extra steps associated with a deconstruction project.

“We were already committed to a partial decon by that point, just for the environmental reasons,” Bachmeier explained. However, “the grant definitely made it much more economically attractive. In our case, it covered about a third of the cost of the deconstruction.”

In less than two weeks, a crew of seven or eight salvaged 110 different items with high reuse promise. Reclaimed materials ranged from windows and doors, to cabinetry and bathroom fixtures, to original flooring. “Hardwood is in particular demand. What you can salvage from an old building is often much better quality than what you can buy today,” Bachmeier explained.

Appliances, such as the boiler and water reconditioning unit, also went to the ReUse Warehouse – though chances are they did not stay on the shelves for long.

“It was all [cataloged] and weighed, and then appraised by a third party for valuation. They do this because, when you do a decon in this way, you can claim a personal charitable tax donation,” Bachmeier said, calling it yet another bonus.

“I do recommend the grant,” he continued. “If you’re considering a renovation and want to give the building materials a long [second] life, you should really consider deconstruction.”

Grants are available from Hennepin County for demolition or renovation projects that are 250 square feet or larger on structures built prior to 1950.

Learn more about the grants, including eligibility and requirements, at hennepin.us/deconstruction.