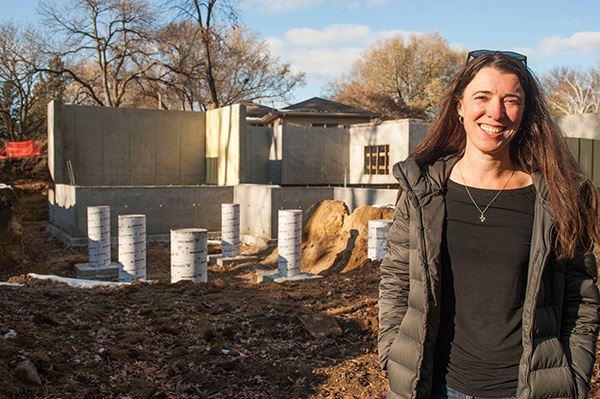 October 2020 — As near as can be figured, the U.S. Environmental Protection Agency calculates that building demolition projects produce 550 million tons of debris each year. For context, that astronomical figure is more than double the amount of municipal solid waste (in a word, garbage) generated over the same period.

Kelsey Arneson and fiancé Tom Metzger encountered heaps of sobering statistics along those lines while studying up recently on sustainable building and remodeling practices. While interested in the subject matter generally, the Minneapolis couple had a specific and pragmatic reason for the deep dive.

“We bought a house in Edina this spring, with the intent to either remodel or tear it down and start over with something that better fit with our lifestyle,” Arneson explained.

While far from perfect, the Countryside property was “a good house … an aging but lovingly cared for mid-century modern.” Given that profile, and Arneson and Metzger’s desire to curtail their environmental footprint, the couple took an active interest in the green practice of deconstruction – a growing trend uncovered by their research.

Deconstruction differs from standard demolition by prioritizing the salvage of materials that can be reused (and thereby kept out of landfills). Fixtures and accent pieces – gems found aplenty in many mid-century ramblers – are particularly prime for reuse.

“Once we’d decided to do this, [Tom] narrowed it down to just a few different salvage companies,” Arneson explained. “For a number of reasons, including because they were incredibly responsive and seemed genuinely excited about the partnership, we landed with a nonprofit called Better Futures Minnesota.”

Better Futures informed the pair about a special deconstruction grant opportunity available to Hennepin County homeowners in 17 suburban communities – including Edina. Successful applicants can receive up to $5,000 (calculated at $2 per square foot of floor plan) to defray deconstruction costs.

“We didn’t think we’d be fully eligible, but our project manager strongly encouraged us to fill out the initial paperwork, which only takes a few minutes,” Arneson said. They received preliminary clearance, followed by final approval, surprisingly quickly and with minimal red tape, she added.

“Over a few weeks in July, a Better Futures team came in to strip original appliances, trim work, kitchen cabinets and some other cabinetry, plus various built-ins from the basement and bedrooms,” Arneson said. “We were surprised by how meticulous it was. They even took the fireplace, brick by brick.”

Arneson and Metzger’s salvage appraisal determined that a so-called partial deconstruction would be best for their property. (Total deconstructions, which reclaim lumber, sheetrock, and other core structural materials, are often less cost-effective and therefore more rare.) After the deconstruction team cleared out, the couple’s building contractor arranged for the demolition and removal of what remained.

“They decided on an environmentally [conscious] place called Atomic Recycling. They later told me it was actually cheaper to go with that place than to use their normal waste removal subcontractor. They’re probably going to use them for other jobs now, too,” Arneson said.

“There’s so much waste involved with home building, that Tom and I would have pursued deconstruction anyway. This grant, and all that came out of that experience, are just icing on the cake.”

Grants are available from Hennepin County for demolition or renovation projects that are 250 square feet or larger on structures built prior to 1950.

Learn more about the grants, including eligibility and requirements, at hennepin.us/deconstruction.