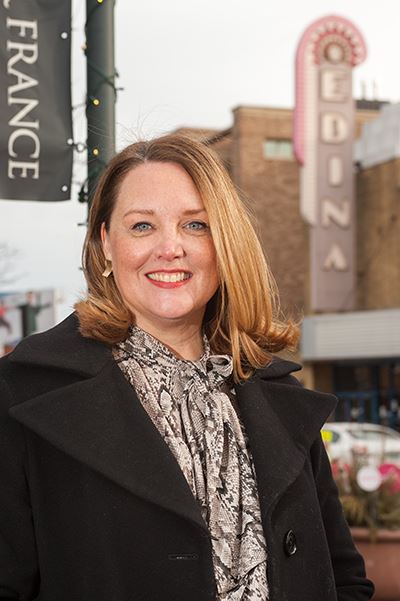 December 2020 — Where racial equity and inclusion are concerned, Edina’s past is a checkered one. Rebecca Sorensen has lived here for more than 15 years and is well acquainted with the more troubling chapters of the city’s history. In the wake of George Floyd’s shocking death in May, however, Sorensen gained a renewed understanding about the equity journey still in front of us.

In the tumultuous weeks that followed, Sorensen drove through South Minneapolis on several occasions to drop off donated supplies. “Business after business, most boarded up during the unrest, had become canvasses for healing graffiti art,” she recalled. She was struck in particular by a tarp mural of Floyd painted by artist Alexander Brooks Parker that adorned a friend’s business on West 24th Street.

In stark contrast, “when I crossed from Minneapolis back into Edina, the artwork stopped, [save for] a few BLM posters.”

Sorensen craved a similarly grassroots, equally visible display of her hometown’s commitment to racial justice – and as it turned out, she was not alone.

“I connected with the [Edina High School] Black Student Union president, my friend Rachel Adegbenro, and we came up with the idea together to create an art effort in downtown Edina.”

When they went public with the germ of this plan, “community partners came out of the woodwork to help, even during the pandemic,” Sorensen continued. High on that list, “the 50th & France Business Association said ‘put your art in our flowerpots at the cross section of Minneapolis and Edina!”

Sorensen contacted Brooks Parker, the African American folk artist who had made such an impression on her with his Minneapolis murals, about how best to approach this ambitious joint project. “We created a public art template to share with Black Student Union student artists, [as well as] community artists from both Edina and Minneapolis.”

Over the next several weeks, small groups of artists met in backyards and at Arneson Acres Park to collaborate on 30 striking painted signs. “Each was unique and sent a message to our community that Black Lives Matter,” Sorensen explained. “Artwork was then weatherized, ensuring the canvases could endure a summer on display.”

Next, proving true the old adage that many hands make light work, Sorensen oversaw a coalition of community partners who pitched in on installation. “The City of Edina donated flowers to grace the public art,” Sorensen said. “I contacted the Morningside Woman's Club Garden Club, who volunteered to plant the 30 flowerpots.”

As if that were not enough, Sorensen also collaborated with the Black Student Union on a suitable dedication ceremony for the installation (christened “Seeds of Change”). Held on July 12, this socially distant but emotionally resonant unveiling drew hundreds to 50th & France.

“It was a beautiful moment for our City,” Sorensen explained, “and for many, it felt like the first time we could proudly call Edina home.”

On that Sunday and for weeks afterward, “We saw people gathered in small groups around the signs, talking about what they saw with perfect strangers and engaging in important conversations.”

In December 2020, the Edina Human Rights & Relations Commission named Sorensen and co-organizer Rachel Adegbenro the latest recipients of the prestigious Tom Oye Human Rights Award. While her role at the center of this impressive feat is certainly worthy of the recognition, Seeds of Change came as no surprise to those who know Sorensen well. Stewardship of grassroots arts initiatives is something of a calling.

For nearly a decade, she has co-curated Morningside After Dark, a live music and storytelling showcase. Recent installments “have spotlit underrepresented voices in the Twin Cities, including our African American, Hispanic and Hmong poets and musicians.”

Sorensen also volunteers her time and talents on the Edina Arts & Culture Commission. While the commission had no direct role in Seeds of Change, she sees that body as strategically positioned to keep racial injustice and inequities in the public eye for as long as it takes to erase them.

Indeed, Sorensen and her cohorts on the Arts & Cultural Commission are currently working with another Edina High School club on what Sorensen calls “a virtual gallery and future public art initiative” that builds upon the momentum of Seeds of Change.

“Be on the lookout for ‘From Struggling to Healing.’ It’s going to be a powerful, youth-led initiative that once again turns to the arts as a way through all the pain of the past year. Together.”