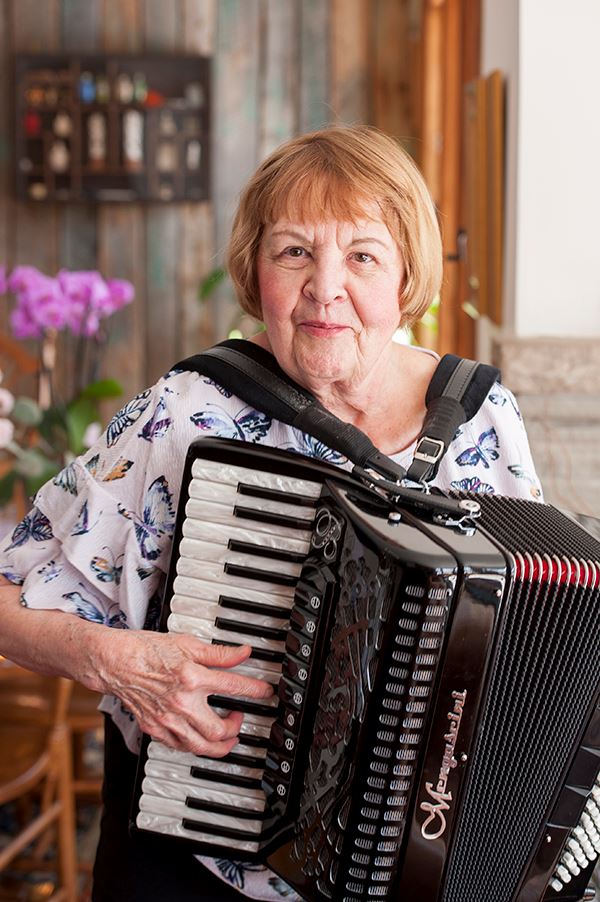 Her career interest in the former dates to her teenage years in post-war Germany, where Brucker took on odd jobs in her father’s medical office. In the early 1960s, she studied medicine at the University of Tübingen – followed by an immunology training regimen to specialize as an allergist.

Brucker’s enthusiasm for music dates back even earlier. “I started playing accordion when I was just 6 years old,” she recalled. “My father found a teacher willing to ride 20 miles, on a bike, to give me lessons/ … I don’t know if he thought I was talented or was just eager for the income!” (Odds are on talent, as that first teacher invited Brucker to play with her first orchestra before the age of 10.)

Some seven decades later, accordion is still Brucker’s primary instrument. However, she has added to the repertoire with pump organ, harmonica and even violin. A self-described life-long learner, Brucker also took (and continues to take) regular vocal lessons through MacPhail Center for Music.

Beginning in the early 1980s and continuing until her retirement in 2015, Brucker practiced at Southdale Allergy and Asthma Clinic. For the first 20 of those 32 years, she did so alongside her husband, Dr. Heinrich Brucker. He passed away in 2003.

Retirement is something of a misnomer for Hannelore. Although she stepped aside from patient care six years ago, she remains heavily involved with the scholarship and administration of the American College of Allergy, Asthma and Immunology (ACAAI).

One of her four children, Henry, flagged a second organization for her attention. “He said, ‘Why don’t you join Rotary? They will welcome you nicely.’” She figured that her son – himself a member and past president of the Aitkin Lakes Area Rotary Club – would not steer her wrong.

Brucker joined the Rotary Club of Edina officially in July 2016. In the time since, she has taken an interest in the work of the chapter’s grants committee and become an integral part of the community service projects committee.

“We help out with things [like] Feed My Starving Children, VEAP, Warm Hands/Warm Hearts, and Salvation Army bell ringing … and there’s a nice holiday gift giving program, too.”

In short order, Brucker thought up a new service project – one that tapped into her diverse musical gifts to further Rotary’s service mandate.

“I kept thinking about people in nursing homes.” Over the years, Brucker has played concerts to appreciative crowds in congregate living centers. Unfortunately, the emergence of COVID-19 and new pandemic restrictions rendered that kind of visit impossible for the foreseeable future.

As an alternative, she decided to invest in new equipment, enlist tech help and experiment with the next best thing: a recorded concert. She describes this as a learning experience. “It turns out we couldn’t just do it live. … My tech person had to do rendering to make the video and sound work and look good together. That took extra time.”

Next, how to find an audience? Thanks to her Rotary network, Hannelore got in touch with the Life Enrichment Services Director of Presbyterian Homes & Services (PHS). PHS oversees 46 senior living communities across Minnesota, Wisconsin and Iowa. This network provides care for about 27,000 residents.

“Nancy Schwartz was open to my ideas, and willing to share my recordings. It was like finding a pot of gold for me,” Hannelore explained.

For her maiden voyage in the digital space, Hannelore recorded Christmastime favorites in English and her native German. These included The Little Drummer Boy, O Tannenbaum, Silent Night Holy Night, and a theme from the Handel opera Judas Maccabaeus.

With the added time required for postproduction, PHS received the 11-song set just before Christmas. “Nancy said this was just fine, because of the ‘Twelve Days of Christmas’!”

Hannelore is currently engrossed in several medical research and writing projects for ACAAI. However, she’s eager to reprise with a sequel concert when time allows. “Next time, I think I’ll share the stories behind the songs as well, because some are pretty [fascinating].” She is also keen to enlist other area musicians and storytellers to do the same for PHS – and hopefully, in time, other nursing home networks as well.