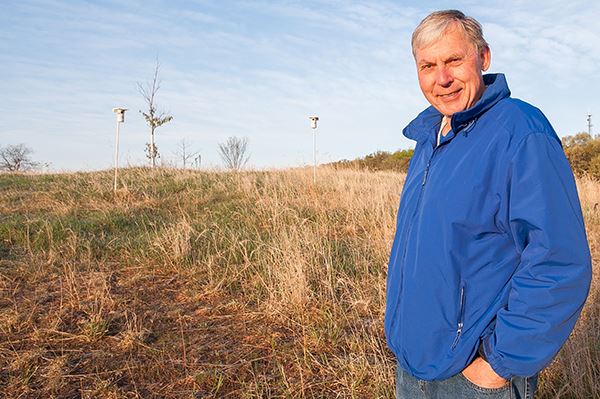 May 2021 – Bluebirds are among North America's most iconic songbirds, and a common sight across Minnesota every spring and summer. It was not always this way. During the last century, habitat loss, pesticides and other factors cut the state’s bluebird population by as much as 90 percent. Fortunately, thanks to the diligent efforts of hometown heroes like Edina resident Bob Hursh, the species is in the middle of a quiet rebound.

Hursh is one of three Hennepin County Coordinators for the Bluebird Recovery Program of Minnesota – the oldest state-level effort of its kind.

One could say he has been training for the role his entire life. “I’ve been interested in birds for as long as I can remember,” he explained. “I built … really, just nailed the parts together … my very first birdhouse as a Cub Scout in third grade.”

Hursh and his family have called Edina home for 36 years. Birds of all stripes frequent his yard in the Lake Cornelia Neighborhood. “I feed black sunflower, suet, thistle seed and safflower seed in the winter,” he said. “I put up hummingbird and oriole feeders when they are here for the breeding season.” That list goes on.

When it comes to his mission to nurture Hennepin County’s bluebird population, he concentrates efforts on a nearby and significantly larger plot – one better known for hosting an altogether different kind of birdie.

“I’ve been a member of the Men’s Club at Braemar Golf Course since 1992,” Hursh shared. “I’d say I generally play one 9-hole round and one 18-hole round per week during the May-September season.”

In this 500-acre City amenity replete with open green spaces, Hursh saw a prime opportunity to marry his twin passions.

If they look closely, golfers will now spot 23 pairs of cedar nesting boxes across Braemar Park. “Most of these are on the Championship 18 and Academy 9 courses, but a few can be found near the golf dome and [South Metro Public Safety Training Facility],” Hursh said. “I’ve had some assistance with siting from Maintenance Operations Coordinator Bob Atol to make sure I don’t puncture buried irrigation and power lines.”

Observers unfamiliar with the ways of the bluebird may find it odd that the boxes are all installed in twos, but with a generous gap between pairings. “Other species aren’t aware that the nest boxes are designed specifically for bluebirds,” Hursh explained. “They can be used by any small cavity nester.” 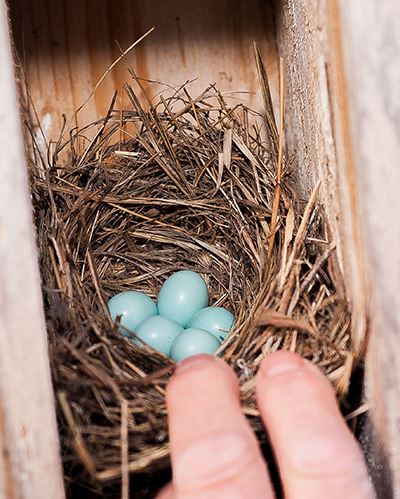 Unsurprisingly, given the number of water features across Braemar Golf Course, tree swallows are a common sight. Wrens and chickadees are also drawn to the sturdy cedar boxes. Fortunately, all these birds are territorial and will not nest within 20 feet of another family of their species. “Generally, that leaves one box of each pair open to bluebirds, even if other birds set up in the [neighboring] box.”

In truth, building and installing nesting boxes is relatively easy. However, caring for them throughout the bluebird nesting season – late April to early August – takes hustle and diligence.

“Bluebirds nest twice per season,” Husch explained. “I need to remove the first nest as soon as the young birds fledge, because it could contain parasites or insect eggs harmful to the second nestlings.”

Hursh also makes weekly inspections, both to count eggs laid and hatched, and to ensure the habitat remains safe for the nestlings. For instance, ants can quickly overrun a nest – an issue that Hursh spotted three times last season. In such cases, a Tanglefoot insect barrier can work wonders. Likewise, blood-sucking insects are deterred by vanilla extract. Squirrels and raccoons are kept at bay by carnauba wax on the box poles.

When bluebirds head south for the winter, Hursh cleans the houses more thoroughly with a diluted bleach solution. Slotted drop fronts are then raised until March, lest deer mice take up residence there and do lasting damage to the woodwork.

If properly cared for, a box can last 15-20 years. For aesthetic reasons, however, Hursh retires many boxes from Braemar after an average of seven years. Most then enjoy a second life. Hursh has set up a 26-box trail in Medina, as well as a 24-box pathway in Ogilvie in rural Kanabec County.

It’s a labor of love, but one that is paying dividends. Audubon International now rates the course as a Certified Audubon Cooperative Sanctuary – one of fewer than two dozen across Minnesota. Moreover, thanks to Hometown Hero Bob Hursh, some 1,453 baby bluebirds have fledged at Braemar since 1992!