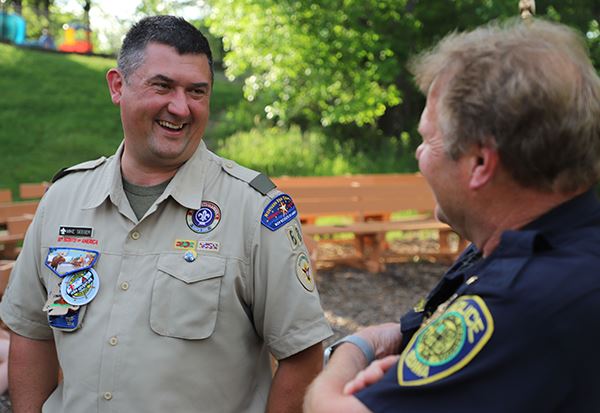 May 2021 – More than a century ago, an early leader of the Boy Scout movement declared: “Once a Scout, always a Scout.” Edina’s own Police Officer Mike Seeger offers proof positive that the old axiom still holds some truth.

“It’s in the family. My father was a Scout, and he had both my brother and I heavily involved with Troop 68,” Seeger explained. That unit of Boy Scouts of America (BSA) has called Edina home for more than 50 years. Seeger attained the vaunted status of Eagle Scout, the highest rank attainable within BSA, in 1994.

Now an officer with the Edina Police Department, Seeger says he regularly leans on skills learned through Boy Scout Troop 68. “They really do raise good men. Scouts takes a boy who is shy, and maybe not all that outgoing, and grows him to a point where he can comfortably, confidently lead people.”

Seeger is now paying it forward with the next generation.

Naturally enough, he enrolled his own children. “They each joined in first grade, which is typical. My oldest is now an Eagle Scout himself, and my youngest came [of age] to join two years ago.”

As a parent, Seeger then had an opportunity to experience and contribute to Scouting in a host of new ways. “First, I followed my boys through Cub Scouts as a Den Leader,” he said. “Boys transfer up to Boy Scouts in fifth grade. … I then stepped into the role of Assistant Scoutmaster, [before] taking over as Scoutmaster for Troop 68 about two years ago.”

Despite what the title would suggest, Seeger believes his leadership role to be a limited one. “Our troop is primarily boy-led. We encourage the Scouts to plan their own meetings and campouts. We parents are there to give guidance – and to give rides.”

Now as ever, camping and the hands-on skills best learned in nature are core to the Boy Scout experience. Some outings are fairly traditional and take place close to home. Others, which Seeger calls “high adventure” trips, stretch the bounds of what is normally associated with Scouting.

“In that case, it’s cheaper for Troop 68 to go it solo. It’s our own backyard, and we have some experienced dads with us.”

With pandemic restrictions abating, there are more exciting opportunities on the horizon. “Our boys will be traveling to Sea Base, a large Boy Scout camp on a Florida Key, sometime in 2022."

Excursions like these are subsidized through significant fundraising. Seeger contends that these fundraisers are an equally important part of the Scout experience. “Like all our other activities, we treat these as learning exercises – preparing the boys to be adults.” Whether selling wreaths or coordinating a pancake breakfast, the Scouts themselves have a leadership stake in their own success.

In addition to self-reliance, Seeger makes sure that all Scouts come out of Troop 68 with a firm grasp of their role as stewards of the environment. Service projects vary widely, though most are nature-based – like tree planting and buckthorn removal. Under Seeger’s leadership, the troop has also “adopted” Edina’s four-acre Melody Lake Park, which they clean twice a year. On such service days, the Scoutmaster never hesitates to get dirty himself.

“[He] demonstrates to Scouts that the positive actions we all take in our schools, community, and state can make the world a better, more inclusive place for all,” explained Michael Hagenson, who serves as a Den Leader under Seeger. “This strong ethical guidepost has paid dividends for our troop, as our retention and recruitment of new Scouts has increased every year Mr. Seeger has served as Scoutmaster.”

In recognition of this dedication, the City of Edina recently awarded Seeger with the 2021 Mayor's Community Involvement Commendation. The award is presented annually to a City employee for outstanding volunteer service to the community above and beyond his or her position with the City.