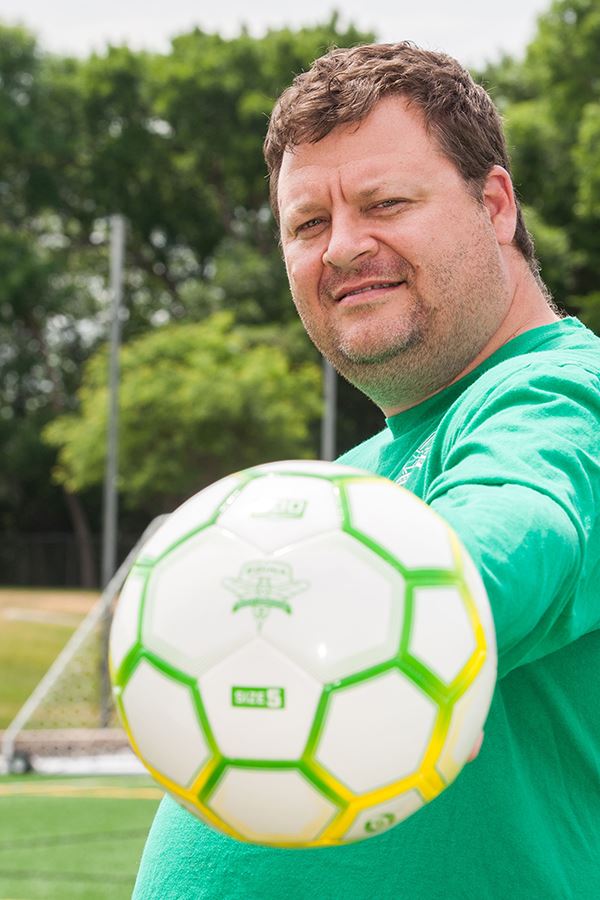 July 2021 -- Edina is home to one of the largest youth sports organizations in Minnesota – and one of the largest soccer clubs to be found anywhere in the United States. Established nearly 50 years ago, the Edina Soccer Association (ESA) has grown slowly but surely to 3,500 student athletes. Coordinating a league this size is a herculean task, but one taken on with gusto each season by community volunteers like Shane Stumm.

Stumm has served on ESA’s Board of Directors – including stints as both president and vice president – for nine years. Like many of his peers, Stumm joined this leadership team only after exposure to ESA as a parent and coach.

“It started many years ago when my daughter Nyla, who is now 17, was in pre-K. My wife signed her up for summer soccer.” As part of enrollment, the Stumms had the opportunity to express an interest in volunteering. Shane, who had played soccer himself, took ESA up on the invitation to learn more.

“The moment I knew I wanted to deepen my relationship with this organization was during their ‘coach kickoff’ event. The information and organization of the volunteer team was outstanding. … I felt totally empowered to jump out on that field and direct the kids in a match!”

After three enriching years of coaching, the Board tapped Stumm to take on the additional responsibilities of a Director. He gave the offer careful consideration before accepting. “From there, though, I’ve never really looked back.”

Stumm’s tenure on the board has already exceeded the average commitment. He credits, among other factors, a pragmatic reason: “There’s a decade between my oldest and youngest children, so I will have a kid playing soccer in Edina longer than most.”

There’s also an undeniable thrill that comes with the challenge of orchestrating a club the size of the Edina Soccer Association. “We’re open to everyone. We have teams for both boys and girls, beginning with 4-year-olds and continuing all the way through 12th grade. That’s up to 26 different age groups to schedule,” Stumm explained.

Across all levels of play, ESA is composed of more than 375 different teams overseen by a network of 400 volunteers.

Occasional logistical hurdles notwithstanding, Stumm says that the Association’s size is actually a great asset. “It helps us keep fees minimal, at about $120 per participant per season.” In addition, “We can capture some pretty incredible economies of scale, which leaves money to do some things that are creative and even innovative.”

Several years ago, for instance, Stumm kickstarted a standing scholarships committee. In partnership with the Edina Education Fund, ESA now bestows college scholarships every year to a select number of outgoing ESA seniors.

On a rolling and at-need basis, the Association also waives enrollment fees for young athletes from underprivileged backgrounds. “Our mission is to provide boys and girls of the community an equal opportunity to participate in this game. I feel strongly that removing the financial [obstacle] where needed is a part of this,” Stumm explained.

Last year, COVID-19 brought with it an entirely new set of obstacles – or as Stumm thinks of it, a new opportunity to try something innovative.

“After the world shut down in March, we knew we wouldn’t be picking up our summer season in May as usual,” he shared. “We came up with an alternative that we branded ‘Soccer in a Box.’ Members had the option of taking a full refund or applying a portion of that entry fee to this kit. … It included a soccer ball, some cones, a jersey with the player’s name on it, and instructional materials to work on over the summer.” Coaches video recorded and released additional lessons over the course of summer 2020.

Soccer in a Box served its intended purpose, keeping a significant proportion of ESA’s players engaged with the sport despite the long moratorium on team practices and tournament play.

In part, Stumm credits that success to the innate appeal of soccer. “Soccer is wonderfully accessible. Unlike the other major sports, all you really need is a pair of sneakers and a ball … and to be honest, you don’t even need the sneakers!”