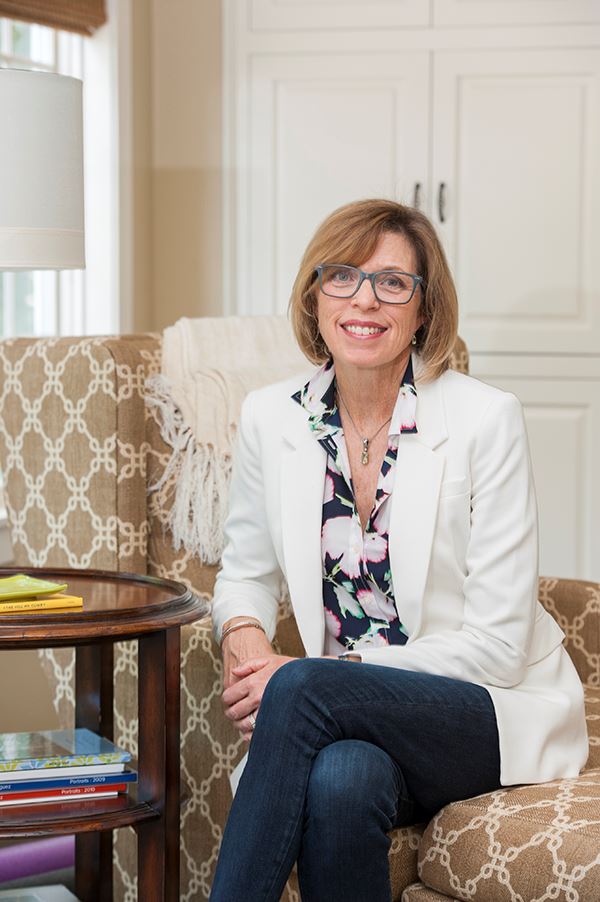 June 2021 — When community booster Meg Rodriguez relocated from New Jersey to Edina in early 2003, she did so with four school-aged children in tow. Understandably, the sterling reputation of Edina Public Schools (EPS) heavily influenced the family’s decision to settle in this corner of the Twin Cities. At the time, however, Rodriguez could not have known just how involved with EPS she herself was to become.

It began almost immediately, if modestly enough, when Rodriguez linked up with a grassroots coalition to save the district’s Spanish curriculum from budget cuts. Her part in that successful effort brought the New Jersey transplant to the attention of the Edina Education Fund.

As the name suggests, “the Ed Fund is an independent organization that supports district-wide innovation in our school buildings,” Rodriguez explained. Since its inception in 1995, the Education Fund has subsidized everything from literacy assessment tools to engineering equipment to free mental health services for students.

Rodriguez readily accepted an invitation to join its board of directors. “I saw it as aligned perfectly with my personal values … as well as a good opportunity to both learn about my new community and to meet people because I am an extremely extroverted person!” It became a long-term commitment, with Rodriguez eventually stepping into the role of board chair.

This would not be her only point of intersection with Edina Public Schools. “I have wildly different kids, but all were involved in high school extracurriculars,” with lacrosse and basketball topping that list, Rodriguez explained. “In all, I was a captain’s parent for an Edina sport some six times.”

“For those who don’t know, captains’ parents do important work, and a lot of it,” she continued. Valued aides and go-betweens, captains’ parents spearhead many gameday logistics, collect student fees, assess equipment needs throughout the sports season, and much more.

“As a captain’s parent, I would occasionally see a check bounce, or have a parent come to me in confidence to say they couldn’t afford a lacrosse stick or travel expense for their child.” Whenever possible, Rodriguez would work with them to find some workaround solution that did not disadvantage or embarrass that family’s young athlete.

Over the years, interactions of this sort became increasingly common. Moreover, Rodriguez reports that her anecdotal experiences dovetailed with what the Edina Education Fund was also observing in myriad other ways: “suburban poverty was coming to Edina.”

“My friend Idith Almog and I began dreaming of ways to systematize the random acts of generosity that were happening throughout our community on behalf of students facing economic adversity,” Rodriguez said. Specifically, “we envisioned a local nonprofit enterprise that could support kids and their families by building a partnership with Edina Public Schools” that complemented the work of the Ed Fund.

“Idith and I agreed we wouldn’t talk about this until we were blue in the face. We were going to try it and learn as we went.” With the blessing of the school superintendent and after a short fundraising feasibility study, Edina Give and Go was born in May 2013.

Ultimately, Edina Give and Go proved a million-dollar idea – and then some. In the eight years since its inception, Rodriguez and Almog’s brainchild has raised more than $1.5 million to defray expenses for students at Edina Public Schools.

Sports fees, which can be high and cost prohibitive for many families, have remained core to the organization’s work throughout this time. However, Edina Give and Go also parlays donations and strong community partnerships to subsidize everything from music lessons and art classes to driver’s ed instruction and ACT prep help.

During the 2019-20 academic year alone, Edina Give and Go “unlocked” more than 400 academic, arts and athletic opportunities for 236 deserving students.

March 2020 opened a new chapter for the EPS partner, according to Rodriguez. “As we all know, the COVID-19 pandemic exposed long-standing inequities in the education space, while also creating new ones.”

Give and Go found itself entering this uncertain time from a position of relative strength. Due to the nature of their work, staff and volunteers already enjoyed a strong rapport with many of the families most likely to be adversely affected by the pandemic. They also boasted their network of trusted partners, each equally eager to make a difference in this time of extra need.

For starters, Edina Give and Go partnered with the Education Fund and Edina Meal Fund to purchase and distribute more than 50,000 evening meals to families impacted by the protracted crisis.

Rodriguez is equally proud of what organizers call Go Learn. “When schools moved to [virtual] learning, some students had access to private tutors, while others didn’t even have WiFi in their homes.” In an effort to bridge that wide gap, Edina Give and Go piloted a partnership with the local College Nannies and Tutors franchisee. It would eventually expand to include other providers, as well.

“Our partners provided at-cost services, with Give and Go paying for the rest. ... It was a matter of everyone giving a little, so that our kids could have a lot.” In total, 124 students benefited from this personalized attention to their academic success.

Rodriguez feels that Go Learn is a perfect demonstration of Edina Give and Go’s value. “We are well known as a fabulous community for kids. I think we hang our hat on that notoriety. I think this means we have a commitment to support all kids, by sharing our resources where and when we can.”