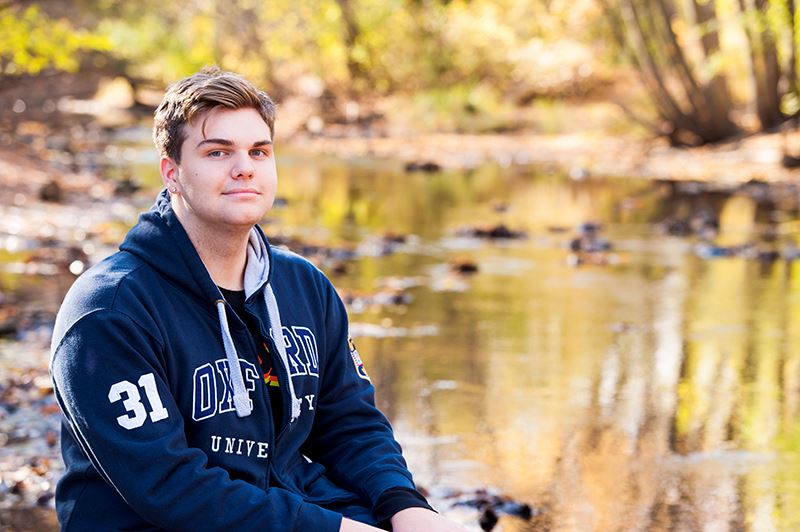 November 2021 — Each summer, day trippers from the Twin Cities flock in droves to Wisconsin’s scenic Willow River State Park. However, few if any come away with a story to match that of Edina High School student Magnus Borene.

Magnus and his mother, Britta Hovey, visited the 2,800-acre preserve in July 2021. Like many who go to see this wooded oasis, located 15 minutes over the Minnesota state line, the pair centered their trip around the iconic Willow Falls. Rushing through a limestone gorge, the falls are 100 feet wide and cascade nearly 50 feet down.

Unlike most, “Willow River Falls has multiple falls in one area,” Borene explained. Stepped drops range in depth from 5 to 15 feet.

Upstream and downstream of these cascades, the water is only inches deep. On nice summer weekends, dozens of families can be seen wading across the channel and in its many gullies. This is exactly what Magnus found himself doing in July.

“I climbed up the steepest fall to explore,” the 18-year-old recalled. It proved slow going, thanks to the powerful current. “Even though it was shallow, it was amazing how strong the pull was, and how slippery the bottom is. … You need significant body mass to not get swept up like a stick in that river.”

After reaching the top, Magnus meandered to the riverbank to get a closer look at some frogs. It was during this brief rest that he heard someone yelling for help over the sound of the rushing water. “I looked around and found him … a younger boy, maybe about 8 years old, going quickly downstream toward the drop and unable to stop himself.”

Magnus scanned his surroundings and quickly realized that not only was this boy without supervision, but he was the only person close enough to intercede. “I was coming to the realization that I had to step in, which gave me huge anxiety. But, he was literally on the edge of the waterfall, and screaming for help.”

Britta saw what came next from her vantage point at the bottom of the falls, where she had stayed behind with the family’s Labrador retriever, Tank. “I wouldn’t say that Magnus is a rock climber of any sort, and I definitely worried a bit about his ability to manage,” she shared. “Even if I was quite fearful, though, it made me proud that he made the quick decision to help a child so clearly in need.”

Magnus crossed over to the prone boy as fast as felt he could without risking his own balance. He reached him in the nick of time. “His torso was literally dangling over the edge of the waterfall when I got there. If it weren’t for a rock that he was just barely holding on to, he would have already gone [over],” he said.

Magnus hoisted up the panicked child and walked him back to the bank. “It took a minute to really process everything – for both of us. I think it’s safe to say we were both in a state of shock.”

Eventually, the boy’s older brother found the pair. “He shook my hand and thanked me over and over again for what I’d done.” Magnus felt a bit taken aback by the praise. “I’m pretty humble usually, and certainly not boastful.”

Even so, Magnus has not been reticent about sharing this story, in hopes that it will inspire and give confidence to any neurodiverse people who hear it. “I have Asperger [syndrome] … and not everything comes easily to me,” he shared.

“With Asperger’s comes a host of physical challenges, including sensory processing, body coordination and anxiety,” added Britta. “Because of those challenges, we are extra proud of Magnus’ heroism.”

“Magnus has an amazingly big heart and concern for other people,” Andrew explained. “He’s always been wired that way – even as he’s been wired to process the world a little differently than some other people do. I hope he fully processes what a big deal it was to step into a dangerous situation and help prevent the tragedy of a child going over those falls.”