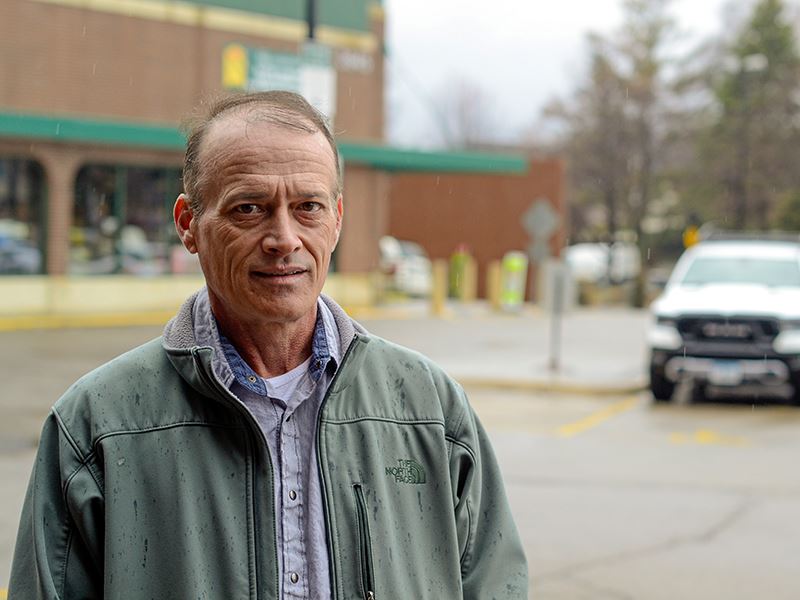 March 2022 — Daniel DeBruzzi is no stranger to dangerous situations or spur-of-the-moment decision-making. Over a 24-year career with the U.S. Air Force’s vaunted special forces, the New Brighton native has participated in more life-and-death missions than he can count. That includes tours of duty in Iraq. This hard-won experience served DeBruzzi well in December, when the 56-year-old played a key role in thwarting an assault and attempted carjacking in Edina.

DeBruzzi, who now resides in Council Bluffs, Iowa, was in Minnesota visiting family in New Brighton and Fridley. On Thursday, Dec. 9, he and a friend (who prefers to remain anonymous) swung by the Lunds & Byerlys supermarket at 50th & France to pick up snacks for a party later that night.

“As we were pulling into the parking lot, we saw two women screaming for help,” DeBruzzi recalled.

As they soon saw for themselves, they were just feet away from a carjacking in progress. “You never expect to drive right into something like that, especially in broad daylight and in such a [busy] area.”

DeBruzzi then saw something even more chilling. Most car thieves look for unattended vehicles, but in this case, the owner of the targeted Porsche Cayenne was still seat belted into the driver’s seat. “She was being assaulted by one guy from her own backseat, and another from the passenger side of the vehicle,” DeBruzzi said.

“I have a daughter about that age, and I would hope that someone would help me or her in that same situation. Us? We didn’t hesitate.”

DeBruzzi, who was driving, hastily parked his Dodge Rebel to block the carjackers’ best route of escape. Meanwhile, his friend joined the altercation. “From there, it all happened so quickly … Before anyone else could arrive on scene, they assaulted [my friend] and laid him out on the parking lot with a concussion,” DeBruzzi recalled.

In hindsight, the Air Force vet feels that his years of military training and drills served him well at this critical point. “They train us very well in hand-to-hand combat. I didn’t need any weapons.”

DeBruzzi entered the fray himself, intending to immobilize the lead assailant with a series of shift punches. In the frantic moments that followed, a third perp – the driver of the carjackers’ getaway car – joined the melee. Nevertheless, the Good Samaritan gained the upper hand and attempted to execute a citizen’s arrest.

One suspect was able to run off, and the other two made a quick escape in their getaway car. In so doing, the fleeing SUV totaled the Dodge Rebel and caused collateral damage to several vehicles nearby. While reversing, the driver also ran over DeBruzzi’s friend – “getting his leg, though miraculously not breaking any bones.”

DeBruzzi approximates that the Edina Police Department and an ambulance team arrived no more than 10 minutes later. While the latter rushed his friend to North Memorial Health Hospital, DeBruzzi stayed behind to fill out police reports and converse briefly with the victim.

“I talked to her, her husband, and several managers from Lunds & Byerlys. They were all appreciative that I was there to help stop the assault and the theft. Gratitude is nice, but I don’t need any accolades. I got plenty of that in my military career.”

For his part, DeBruzzi is just grateful that no one was more seriously injured. One of the attackers bit his finger, causing him to lose a nail. The principal victim sustained numerous head and shoulder wounds. However, both were able to walk away from the scene. “It wouldn’t have taken much for this to have turned out much, much worse, you know?”

Once cleared to leave the scene, DeBruzzi sped to the hospital and stayed up overnight with his friend. Both were shocked to learn that the same perpetrators had attempted carjackings in St. Louis Park earlier that same afternoon, but relieved to hear that the authorities apprehended them after the fracas at 50th & France.

“Police did their job. I like to think that I did mine, too. Police can’t be everywhere. Good people need to stand up, because evil happens when good people do nothing [in] scenarios like this.”