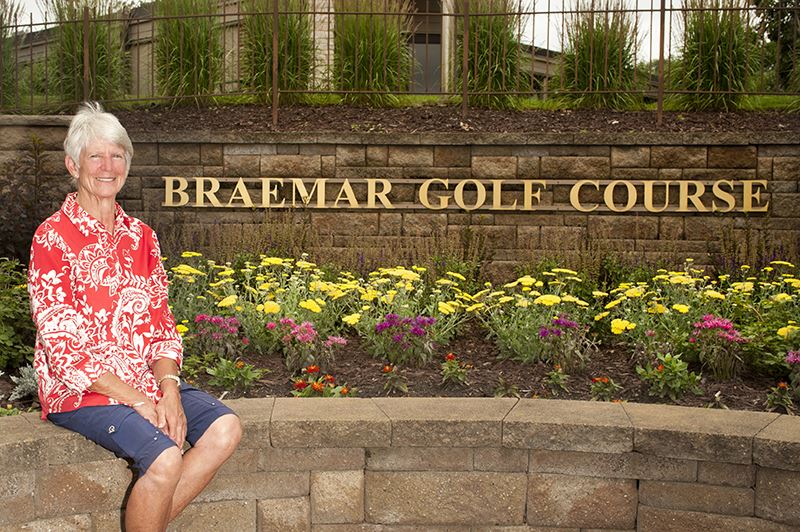 July 2022 – Summer jobs are a rite of passage for most teenagers. However, precious few can claim a close, lifelong relationship with that first employer. Pacy Erck is the conspicuous exception, as Braemar Golf Course staff and regulars will readily attest.

Erck’s connection to Braemar is as old as Braemar itself. The Village of Edina opened its fairways with fanfare on July 22, 1964. Erck was there on Day 1 and throughout the busy inaugural season. Far from actually applying for this work, she was flattered by a personal invitation from none other than the Village Manager, Warren Hyde.

“They had me working in the Pro Shop at first,” she recalled. Before long, though, “Harry Cooper, who was Head Pro at the time, had me teaching beginner lessons to prospective golfers. I did that throughout my high school and college years.”

After graduation, Erck accepted a position at her alma mater, Edina High School, teaching physical and health education. She remained there from 1972 through 2005. Staying local allowed her to maintain ties to Braemar as a member of the Wednesday Braemar Women’s Club League. She became group treasurer in the 1990s – an important assignment in hindsight, as it led to other leadership positions.

Erck served on the Braemar Golf Association Board from 2008 to 2021, including time in the elected post of secretary, and also sat on the standing Greens Committee between 2008 and 2014.

Braemar closed for a sweeping, years-long redesign in 2016. Erck was far from idle during this time. “[General Manager] Joe Abood invited me to be on the committee that ultimately selected architect Richard Mandell to develop the plans for the new course,” she shared. “That was very exciting.”

As Braemar prepared for its grand reopening in 2019, Abood appointed Erck to spearhead another difficult assignment. “He asked if I would form a task team to create one women’s club out of the six individual leagues that play Monday through Thursday mornings.” It represented a complex logistical challenge, to be sure; but Erck and her colleagues were more than up to the task. When all was said and done, “we had 243 golfers all together in our new Braemar Women’s Club!” Erck is currently treasurer of the consolidated Women’s Club.

Erck rotated off Braemar’s Board of Directors in 2021, but remains as invested as ever in its success. Almost as soon as her term expired, she volunteered to realize an ambition that Abood and the board had been discussing for years: the purchase and installation of an heirloom clock to grace the clubhouse.

“As a way to fund it, we’d originally discussed having members donate $1,000 to have their name plate put on the clock,” Erck explained. “However, years passed without anything getting done, and I just decided that Joe had waited long enough.” Thanks to a $30,000 gift from Erck on behalf of her family, Braemar’s new signature clock will be installed within a few months for all to enjoy.

In this same spirit, “I also paid for the new Memorial Garden, located beyond the activity area,” Erck said. “People can purchase pavers through a Memorial Fund and have names engraved and displayed right there at Braemar.” (Erck herself purchased two of the first pavers, bringing her vital kickstart support for this project to $4,000.)

Braemar's appearance contributes in a big way to its ranking as one of the top public golf courses in the Midwest. However, as Erck knows full well from decades as a dedicated golfer (and those bygone days as one of Braemar’s first employees), it is people who make it all possible.

“I appreciate all the staff and employees at Braemar so much that I have a monthly ‘Pacy Appreciation Day,’ where I pay for every employee’s food and drinks to thank them for all they do to make Braemar Golf Course a destination course in the Twin Cities.”

On the last Pacy Appreciation Day, Braemar staff and Mayor Jim Hovland surprised Erck with their own mark of gratitude: the 2022 Mayor’s Individual Service Award, presented to her at the first tee.

“I couldn’t have been more honored, because Braemar is like a second home for me.”