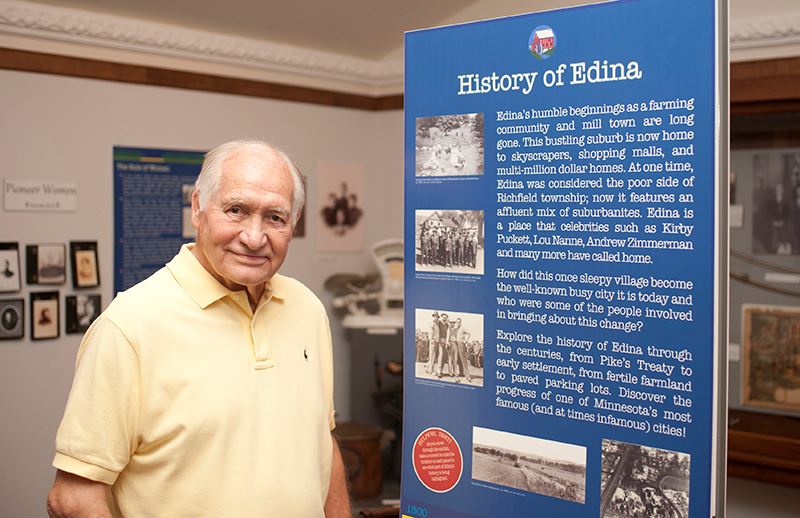 July 2022 – Bob Kojetin holds distinction as the City of Edina’s longest-serving Park & Recreation Director (1977-1994). He has plenty to show for it, too. Among other achievements, Kojetin stewarded the development of well-loved civic gems like Edinborough Park and Centennial Lakes Park.

If his public service record ended with retirement, Kojetin would already be a hometown hero. Since leaving the City in an official capacity, though, the former parks head has only redoubled his commitment to the community he’s called home for more than 60 years.

He is veritable encyclopedia on both.

“Bob Kojetin is a living history of the City of Edina,” shared EHS Board President Sarah Solsvig. “In fact, there would be no Edina Historical Society without his efforts. Back in 1969, he was among the original group of City leaders who chose to preserve artifacts of our local history for future generations.”

Kojetin says that favorite acquisitions include salvaged fixtures from Wooddale Elementary School and a horse-drawn buggy from the Willson farmstead.

“We hired a horse and used that buggy in the Fourth of July parade for years,” Kojetin recalled.

Parade floats are something of a specialty for Kojetin. Since retiring, he has designed varied and creative entries for the Historical Society – and for other community organizations as well. These include a crowd favorite: a trailer for the Edina Garden Council topped with a working fountain. Kojetin says he achieved the clever effect with a hidden kiddie pool and a pump powered through a car cigarette lighter.

Kojetin also appreciates the parade’s more solemn elements. As a sergeant in the Korean War, he has participated many times in the parade’s celebration of veterans.

Fittingly, the parade route winds past Utley Park, home of the Edina Veterans Memorial. This monument – a granite wall engraved with the names of local service members who died in the line of duty, topped with a bronze eagle – is another achievement of which Kojetin is rightfully proud. He sat on the Edina Veterans Memorial Committee tasked with bringing it to fruition.

While the bulk of this work spanned from 2010 to the official dedication ceremony in May 2015, Kojetin says that the committee is still active. “There’s just a few of us now, but still work to be done,” he said.

When new facts or photos come to light, it falls to this small group to reappraise and suggest updates to the nearby information kiosk – and occasionally, to the granite monument itself. In 2022, Kojetin and his cohorts spearheaded the drive to add a 35th name (a Vietnam War vet who died during combat training in Mississippi) to the engraved honor roll.

As a member of this leadership team, Kojetin had a hand in selecting the small army of design and construction professionals who actually erected the monument. When an opportunity presents itself, though, he is quick to contribute his own labor and handicraft skills to Edina.

“Those parade floats are just a small piece of it,” he chuckled.

The Braemar-City of Lakes Figure Skating Club (BCLFSC) is high on the list of direct beneficiaries. While still Director of Park & Recreation, “Bob was a friend to the club and supporter of our growth,” explained Loni Keenan, one of two head professionals at BCLFSC. “In his retirement, he designs and builds set pieces for our annual ice shows.”

“Some of these props are eight feet tall,” Kojetin explained. Personal favorites include a ship, a car and a top hat large enough to hold multiple skaters.

While this last prop is a one-of-a-kind creation, that hands-on approach is perfectly in keeping with Kojetin’s life-long commitment to bettering Edina. In recognition of these diverse contributions, Mayor James Hovland recently awarded Kojetin the 2022 Mayor’s Outstanding Senior Commendation.