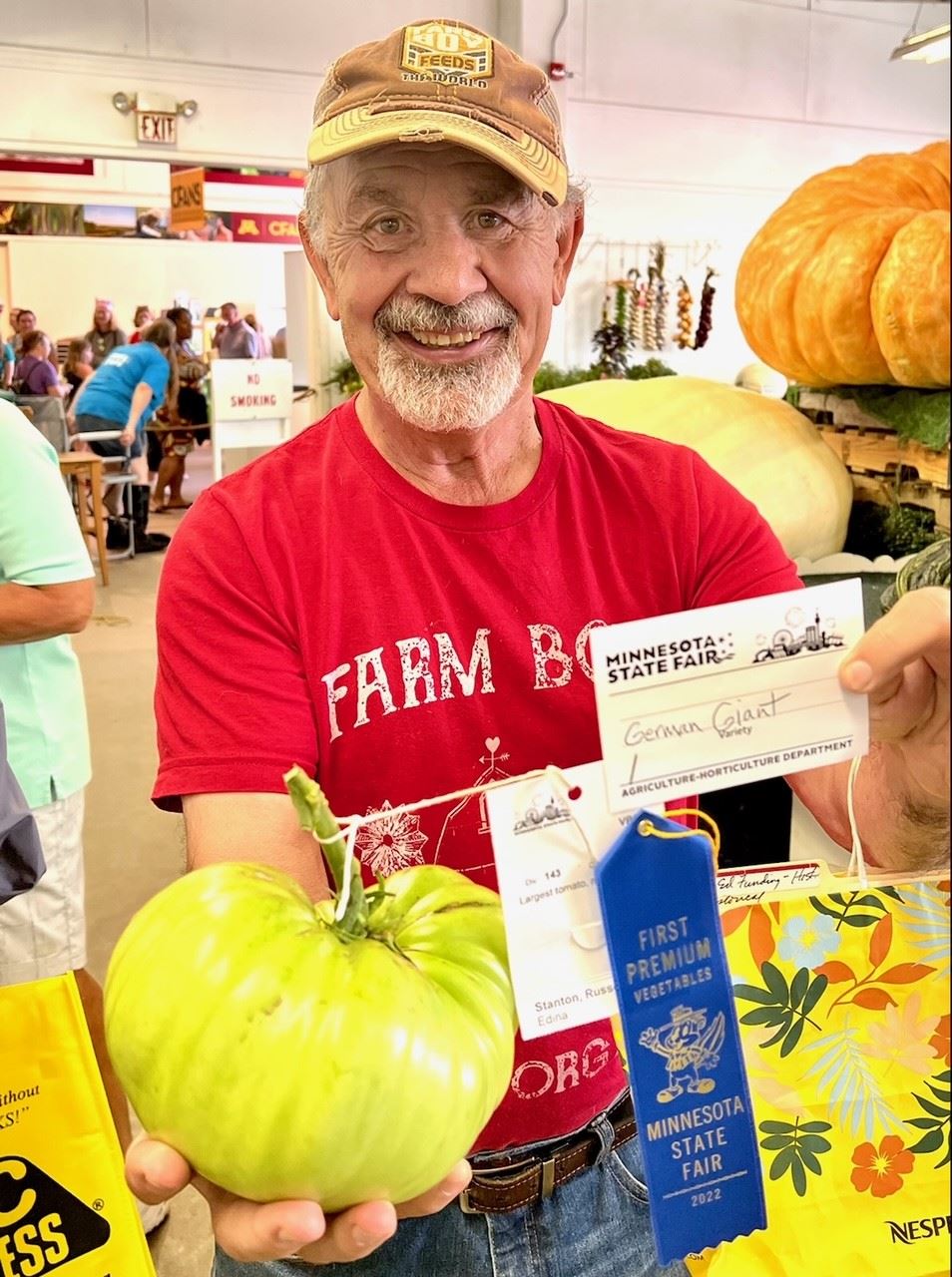 September 2022 – Whether you’re inclined to classify tomatoes as fruits or as vegetables, there’s simply no arguing that Edina resident Russell Stanton grows the biggest one around. Stanton, who lives in the Brookview Heights Neighborhood, took top prize at the Minnesota State Fair this year for a 2.74-pound showstopper cultivated in his backyard garden.

For context, an average tomato weighs in at just 4-7 ounces. However, as Stanton knows well, some varietals have more prize-winning potential than others. “If you’re looking to grow big, not just any tomato seeds will do. … I went online to order seeds for a special heirloom type called the German Giant.”

In order for these seedlings to live up to their name, a gardener must supply three things. “In addition to good seed, you need lots of sun, lots of water and good soil.”

This last can be the trickiest, but Stanton has a secret weapon. “Compost is like black gold for gardeners, and I dump bags of it.”

He sources it locally, too. Since its inception in June 2020, the City of Edina's organics recycling program has diverted more than 2,400 tons of food waste from landfills. It is repurposed as nutrient-rich compost, much of which finds a second life in gardens and flower beds like Stanton’s.

“I had my own personal compost pile for years, but turned to the City program last fall when planting a new hosta bed.” After seeing how well it performed, he applied this same black gold to his spring garden crops: winter melon, Bok choy, and, of course, tomatoes.

Growing a blue-ribbon vegetable is a hands-on enterprise – and as Stanton will attest, one that takes practice. “I tried to compete in this same category last year, but started too early. My biggest tomato had rotted by the time the State Fair came around.”

For his sophomore attempt, he grew the seedlings indoors and staggered their transplant into his garden so that at least one would be ripe on the judging day. “I dug shallow holes and dumped a whole bag of compost for each.”

As the big day drew closer, he identified the biggest tomato and removed all other fruits and blossoms from that plant – “so that all the energy would go into that one tomato.” After the Giant German became too heavy for its stalk, Stanton even propped it up with a makeshift hammock crafted out of garden posts and an old face mask on hand from the pandemic.

While this summer marked Stanton’s first win in the tomato category, he is no stranger to agriculture competitions. In years past, the Edina resident has won the Minnesota State Fair’s largest squash contest not once or twice, but six times.

“It started when a neighbor took a trip to India and brought me back some squash seeds,” he recalled. Plants native to that area tend to do well in Minnesota’s temperate climate because our growing season sees extra hours of sunlight.

“We visited the State Fair that year and noticed the squash entries. I thought: ‘We can grow it bigger!’ Sure enough, the next year we entered [and won] easily.”

After his sixth victory, Stanton retired from that particular contest – but he has been far from idle. In addition to his latest victory, this backyard gardener extraordinaire has taken home the blue ribbon twice for longest bean and once for largest zucchini.

Whatever the contest, Stanton is always proud to represent a community that is, understandably enough, not generally associated with agriculture. “Edina’s soil is so rich – and our compost makes it even more productive.”

From a certain point of view, then, every household participating in Edina’s organics recycling program can claim to small share in Stanton’s latest achievement!