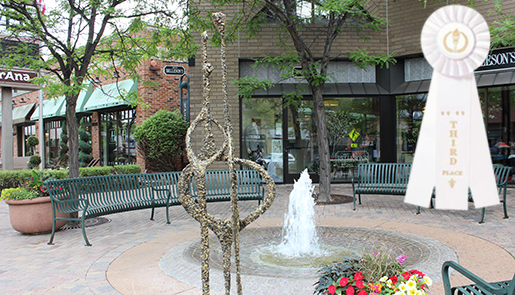 “Bonded Souls” is a steel, fused bronze and clear-coat sculpture mounted on a small, metal raised platform. The sculpture itself stands six feet high. The concept of the work is based on the figure and the body in motion. “Bonded Souls” depicts three lifelong friends. Each has gone on to experience life’s challenges and responsibilities but when they get together it is as if they have never been separated.

James Bearden is an abstract artist, creating sculpture full time since 2007. His studio is located in Des Moines, Iowa. His work is based on the figure. He works in series named Cathedral, Assemblage, Voids and Lunar Blooms. Bearden was born in the Southern region of the United States and raised in the Midwest. He earned a B.A. in Fine Art and a B.A. in Visual Communications from Grandview College in Des Moines, Iowa. Upon graduation, he worked in graphic design for twenty years, seventeen of those as an Art Director for which he received 52 Addy Awards.

"Bonded Souls" is part of a rotating exhibition of sculptures and is eligible for the 2016-2017 People's Choice Award. The piece can be purchased for personal acquisition or as a gift to the City for $8,000.