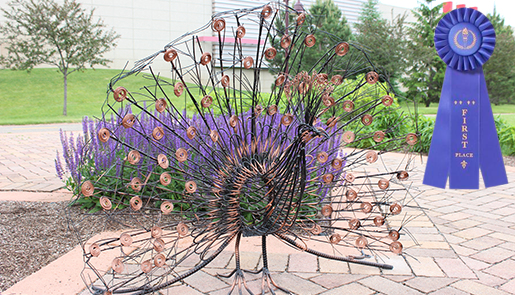 “Peacock Display” is a representational piece made entirely of intricately shaped iron. This large, modern work represents two male peacocks displaying for the attention of a female. In an outdoor setting, the work spans over 9 feet long, just less than 4 feet high and weighs approximately 120 pounds. The iron is painted black with copper highlights.

Jim Dehne resides in Newton, Wisconsin and draws inspiration from the wildlife and flora of the Wisconsin countryside as well as the nature he observed while living and traveling across the country. Dehne was born and raised on a dairy farm named Point Creek Farm, joined the Army after high school and served in Alaska for three years and stayed an additional four years enjoying the Great Northwest. He later returned to the lower 48 to take over the family farm.

“Peacock Display” is part of a rotating exhibition of sculptures and is eligible for the 2016-2017 People's Choice Award. The piece can be purchased for personal acquisition or as a gift to the City for $5,500.