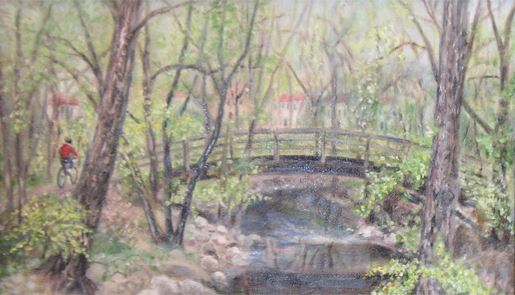 “Urban Jewel” was installed in City Hall in 2004. It was one of three pieces selected to be hung in Edina City Hall for the 22 Miles: Celebrating Minnehaha Creek art show. The photo depicts a peaceful bridge over Minnehaha Creek.

Linda Kieffer began studying charcoal drawing at the Edina Art Center in 1998. In early 2000, she began painting with oils in the Atelier style of classical realism. Kieffer’s works have been displayed in shows around Minnesota and she has won several awards for her portraiture and landscape work.

“Urban Jewel” was funded by a grant from the Edina Community Foundation. The major donor for the grant was Xcel Energy