George W Baird, a native of Pennsylvania, immigrated to Minnesota where he met and married Sarah Gates in 1857. Shortly thereafter, they purchased a farm in the Edina Mills settlement, and in 1886 built the home we know today. 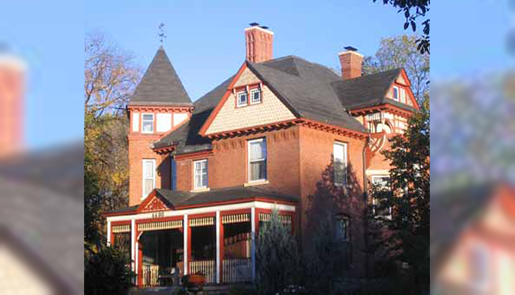 An ardent promoter of scientific farming, Baird was a pioneer in livestock breeding and is credited with bringing the first Merino sheep to the state. Both George and Sarah were major contributors to their community - George was Treasurer for the local Minnehaha Grange when he died in 1916, and Sarah was not only the first editor of the Grange newspaper The Minnehaha Spray, but also served as the State Grange Master for 18 years. Sarah also left a series of 31 diaries when she died in 1923, documenting her early Edina farm life. The diaries are now in the possession of the Minnesota Historical Society. In 1936, eighty acres of the Baird family farm was platted as part of the Country Club District.

Built in 1886, the house was designed by the prominent Minneapolis architect Charles S Sedgwick. A well-known community landmark, the house was unquestionably the most imposing residence in nineteenth-century Edina. The historic home is a two-story, red brick, Eastlake style cottage. Viewed from West 50th Street, the house has a striking silhouette, with multiple roof shapes, dormers, a square tower, a large front porch and tall brick chimneys. The exterior finishes are embellished with stone window trim, transoms, wooden shingle "feathers" in the gables and belt coursing. The raised front porch features wooden posts and balusters, with a pediment over the entrance.

Although the National Register documentation suggests that it is not an outstanding example of a Sedgwick-designed, Eastlake style house when compared with other, similar properties in Minnesota, in the context of Edina history the Baird House is a rare and notable example of the style.

Currently, the property is in an excellent state of preservation, thanks to investments in rehabilitation made by the previous and current owners. The house received a 3,500 square foot addition in 2002-2003, including a garage and living space attached to the rear elevation. The new work is compatible in scale, color, and texture with the original construction and does not detract from the property's historic character when viewed from West 50th Street. The historic property comprises a 1.7-acre site that is surrounded on all sides by suburban residential development. A one-story frame outbuilding, itself an amalgam of different structural elements assembled at different times, is located on the grounds near the house and contributes to the historic character of the property.

The George W Baird house was added to the National Register of Historic Places in 1978; recognizing the home's fine Eastlake style architecture, as well as the notoriety of George and Sarah Baird, one of the founding families of Edina.

Originally included in the City's heritage preservation overlay district in 1976, the George W Baird home was again re-designated an Edina Heritage Landmark in 2004 to comply with the updated zoning ordinance addressing landmark designations. This landmark designation recognizes how over time, the home has retained historic integrity of those features necessary to convey its historical and architectural preservation values. A plan of treatment was created for the property in partnership with the owners to provide assistance in planning for the property's future.

The Baird House was the first recipient of the Edina Heritage Award in 2003, recognizing the attention to detail and the historic integrity of the home when adding an addition to the rear side.