Cahill School, built in 1864, is one of Edina's oldest surviving buildings. It served as the center of Cahill's Irish community, acting not only as a school, but also a place to hold meetings, dances and other social events. 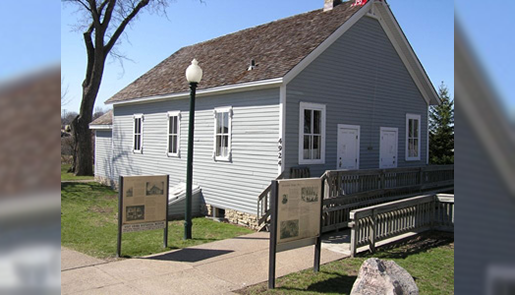 The school was also used by the congregation of St. Patrick's Catholic Church until 1884. Cahill School continued to serve children of all ages until the 1950s, even as the new planned communities of Morningside and the Country Club District built new, more modern schools for their children. In 1958, historic Cahill School closed and students were moved to a new brick school house on West 70th Street, also named Cahill School (which has since been torn down to make room for housing.) In the 1960s, the City of Edina acquired the historic school building and moved it to its current location in Frank Tupa Park.

The Cahill School building is a one-story, frame, vernacular one-room schoolhouse with a rectangular plan, a gable roof and limestone foundation walls. The exterior walls are finished with horizontal lap siding and the original wood shingle roof has been covered over with asphalt shingles. The interior walls and ceiling are lath and plaster, with a beaded wood wainscot, maple flooring and slate chalkboards.

The Cahill School was added to the National Park Service's National Register of Historic Places in 1970; recognizing the school as not only the one-time nucleus of the Cahill Community in the late 1800s, but also as one of the few remaining one room schoolhouses in the State of Minnesota.

Cahill School's designation is unique in that it is not a privately owned property. The City owns both the school and the Grange Hall, and are responsible for the upkeep of both buildings. The school was designated on the basis of its association with important events in local history and its distinctive architectural characteristics. The HPB evaluated the significance of the historic property within the local historic contexts "The Agricultural Landscape (1851 to 1959)" and "The Cahill Settlement: Edina's Irish Heritage (1850s to 1930s)," outlined in the Edina Historic Contexts Study adopted in 1999, and found that it retained historic integrity.

Classes organized by the Edina Historical Society at the Cahill School are taught as they would have been at the turn of the century. Topics of the day include grammar, penmanship, arithmetic, reading, manners, morals, hygiene/physiology, weather and history. In addition, indoor and outdoor games are played and a spelling bee is held. Lunch is eaten next door at the historic Grange Hall, which once served as a meeting hall and social center for pioneer Edina farmers.

"Through our programs at the Cahill School, the history of Edina is presented to children in a real and graphic manner," said Edina Historical Society Board Chair Kathleen Wetherall. "Through the one-day classes there, children identify with the people and events of early Edina and the rest of Minnesota. At the same time, one of the few remaining one-room country schools in the county has been restored and preserved for future generations."

"The children love coming to the school," said Wetherall. "They are enraptured. One little boy was having such a good time that he didn't want to go back to the present year. He hid under his desk, hoping to stay in the year 1900!"

The one-room rural schools that were once the mainstay of education in Minnesota have largely disappeared. Of those that exist, many have been abandoned or converted for other uses. The Cahill School, relocated from the Cahill neighborhood of Edina to its present location in Tupa Park, remains as a place for education. The Cahill School operates from 10 a.m. to 2:30 p.m. every day that classes are in session during the school year. Four teachers or "schoolmarms" take turns during the week leading the classes.

The historical educational center was first proposed in 1971 to give students the opportunity to spend a typical day in a one-room country school of the early 1900s. It opened in the fall of 1975. The main objective now, as it was then, is to help children experience history by actually sitting in the old wooden desks, using slate boards, looking through school books of the period and playing old-fashioned games.

Elementary school students (usually grades two to four) come from all over the region to the Cahill School for lessons in history. A school from Superior, Wis., comes the furthest on an annual basis. The Edina Historical Society books classes in August, before the start of the school year.

~As seen on the Edina Historical Society's Website and in About Town, Spring 2003~