The History of the Grange Hall begins with a history of the Order of the Patrons of Husbandry - a national organization for the "social fraternity of the farmers" dedicated to the principles of "progressive agriculture." 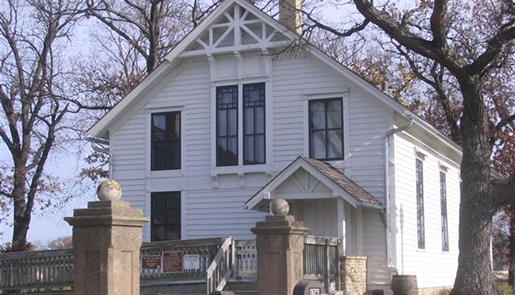 The group was founded by Oliver Hudson Kelley, a farmer from Sherburne County, Minnesota, in the late 1860s, and many Grange chapters sprouted up like cornstalks throughout the country. Edina's Minnehaha Grange Number 398 was organized on December 12, 1873 - even before Edina incorporated as a village.

In 1879, the Grange built a meeting hall on the southeast corner of Wooddale Avenue and West 50th Street. In addition to its fraternal uses, this building served as Edina Village Hall from its incorporation in 1888 to 1942. Many historic events took place here, including the decision to name Edina and the secession of the neighborhood of Morningside.

In 1935, the Grange Hall was moved for the construction of St. Stephen the Martyr Episcopal Church. Relocated to the vicinity of Normandale Road and Eden Avenue, the building was moved again in 1970 to its present site in Tupa Park.

The Grange was the only organization established to improve rural life and farming. The Grange also provided a way for farmers to work together, created a sense of government and gave the community a place to socialize. This socialization was particularly helpful for the women, who had little opportunity to interact with others outside of their farms. The women were not only encouraged to become members, but also went on to hold high-ranking positions. An example is Edina's own Sarah Baird who was editor of the first edition of the Grange newspaper "The Minnehaha Spray" and served eighteen years as the State Master of the Grange.

The Minnehaha Grange Number 398 Hall is a one-story, frame, vernacular meeting hall with a rectangular plan, a gable roof and limestone foundation walls. The exterior walls are finished with horizontal lap siding and the original wood-shingle roof is covered with asphalt shingles. The front gable is embellished with decorative stick-work and brackets and there is an open entry portico with a gable roof supported by two square posts. The interior walls are unfinished car siding and there is a small balcony and an elevated stage. The building has been altered from its historic appearance but is in a good state of preservation. It currently functions as an historical interpretation site and is occasionally used for meetings.

The Grange Hall was added to the National Park Service's National Register of Historic Places in 1970; recognizing it as not only one of the few remaining Grange Hall structures standing in the State of Minnesota today, but also for its importance to the fabric of Edina's history.

The Grange Hall, like the historic Cahill School, stands in Frank Tupa Park not far from its original post at the southeast corner of Wooddale Avenue and West 50th Street. In 2002, the Grange received Edina Heritage Landmark designation in recognition of the importance the Grange held in Edina's history; specifically on the basis of its association with important events that reflect significant broad patterns in local history and its distinctive architectural character. A plan of treatment was created to accompany the landmark designation and will protect the Grange Hall by providing guidance for any future work.