The Oskam House is a two-level, single-family residence in the International style with a rectangular plan, a butterfly roof, post and beam construction, a walk-out basement, and a two-car detached garage. 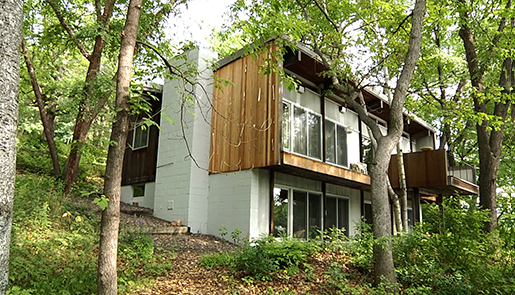 In keeping with its style, it is carefully integrated within its site. The exterior walls are clad with vertically grooved redwood siding. The interior of the house reflects the modernistic aesthetic in its vigorously functional open plan, geometric shapes, flat surfaces, exposed post and beam structure, and indirect lighting. The floors in the kitchen and other functional areas are covered with brick pavers, a feature borrowed from Dutch vernacular architecture. The floors in the living room, study and bedrooms are carpeted. The house is set into a sloping half-acre lot overlooking Indianhead Lake. The detached garage echoes the house in design and materials and is accessed by a paved driveway from the street. When viewed from the public right-of-way, the house looks smaller than it really is and presents a somewhat stark appearance, but the rear (east) elevation features large windows overlooking the lake and surrounding woods. The property is in an excellent state of preservation and retains a high degree of historical integrity.

The Oskam House qualifies for designation as an Edina Heritage Landmark by meeting the criteria for evaluation set forth in City Code §36-714. Its historical significance is the product of its association with the broad themes of suburban development and Midcentury Modern residential architecture in Edina. The property is widely recognized by architects and architectural historians as one of the outstanding residential examples of the International style in the Twin Cities area. The house is in excellent condition and retains historic integrity of those features necessary to convey its significance.

The house was built in 1963 for the late Dr. Hendrik J. Oskam (d. 2001), professor of electrical engineering at the University of Minnesota, and his wife Marrigje M. Oskam, who is the current owner. It was designed by Elizabeth Scheu "Lisl" Close (1912-2011) of Close Associates, a firm well known for its role in helping to disseminate the Modern Movement philosophy and aesthetic in Minnesota. One of the first women licensed to practice architecture in Minnesota; Lisl Close (although she refused to call herself a woman architect) was a role model for a generation of women who aspired to careers in what was then a male-dominated profession.

The International style developed in Europe during the 1920s and became popular in the United States during the middle decades of the twentieth century. Minimalist and utilitarian in concept, the common characteristics of International style houses are their compact plans, simple geometric forms (usually rectilinear), undecorated exterior walls, and open interior spaces; glass and reinforced concrete were the preferred materials of construction, although regional variants sometimes incorporated wood, stone, and other indigenous materials. In the context of Twin Cities suburban development, the International style encompasses the period from roughly 1938 until 1975, but it reached its height of popularity around 1960. Architect-designed houses in the International style are rare in Edina, where postwar builders generally favored house forms based on the Ranch style over more avant-garde manifestations of Modernism.

One of the first homes built on Indianhead Lake, the natural terrain remained untouched as the Oskam home nestled into the sloping hillside. There have been no additions to the homes since it was constructed, however it has been meticulously maintained, and is as shining an example of Mid-Century Contemporary architecture today as it was when constructed in 1963.

In addition to being a noteworthy example of Modern residential architecture, the house is one of a relatively small number of post war residences in Edina designed by a female architect. Elizabeth Close received a degree in architecture from MIT. In partnership with her husband, architect Winston Close, she designed many modernist buildings and was an influential force in regional architecture. Her work is important in the realm of women's history as well as architectural history.